These questions regard last night’s episode of Showtime’s Homeland. Please answer the prompts with specific examples from SUNDAY’S EPISODE, though supplementary material will be accepted as a secondary source. Please write legibly. No. 2 pencils only. You have an hour to finish this test. See below for questions and sample responses.
1. The only personal item in Quinn’s bare-bones apartment is a copy of Great Expectations in which he keeps a picture of his newborn son, John Jr. There is a character named John in Great Expectations: Mr. Wemmick, the man with “a post-office of a mouth” who serves as the go-between for Pip and his lawyer, Jaggers. How may Quinn be comparing himself (John Sr.) to Wemmick here? What other similarities might he see between his current situation and the plot of the Dickens novel?

The most obvious comparison between Quinn and Wemmick, besides the aforementioned “go-between” status, would be that they both go by their last names, as a way of protecting themselves against the world. (That’s why his baby’s mamma waits for Saul to give John X a last name and isn’t forthcoming with one.)

Additionally, Wemmick builds himself a replica of a castle with a moat to live in to protect himself from the outside world; Quinn lives in a secure fortress of solitude and apparently spends more money on security measures devices than decor.

Wemmick’s split personality is revealed with his love for his fiancé, which humanizes him in Pip’s eyes. The only link Quinn has to the outside world is the mother of his son and his child.

So even while we hate Quinn for trying to kill Brody, we must remember what Pip says of Wemmick, “there were twin Wemmicks and this was the wrong one.”

2. The title of the episode, “Two Hats,” refers to Quinn’s two jobs (analyst/assassin), but several characters conspicuously wear hats over the course of the episode: Nazir, Quinn, Quinn’s real boss (F. Murray Abraham!) and, of course, the oft-behatted Saul. We have many expressions involving hats in English beyond the titular one: we do something at the drop of one, talk through one, keep things under one, etc. Which of these or other idiomatic hats are evoked by the characters’ various chapeaux?

It struck me watching this episode how the writers have finally found a use for Mike, who now wears “two hats”: He is both a source of comfort/security for Jess and the Brodys, and is the apparent go-between for the CIA and the family. (How good is he laying down the law as Dana’s new daddy? So good!)
“Keep it under your hat” could be the alternate name for this entire series, while “I’ll eat my hat” is usually what I find myself saying in regards to the realism of Homeland. As in: “If it turns out that Carrie is the last person to know that Estes and Quinn have a hit out on Brody, I’ll eat my hat.” I’ve eaten several hats this season, BTW.

3. It is clear from Estes comments and Quinn’s actions that CIA brass still considers Brody a terrorist and a threat. In light of the two details that Brody apparently chooses to leave out of the retelling of his abduction–Nazir thanking him for saving his life in Beirut, and the two of them praying together–how justified is such a judgment? Has Homeland tipped its hand, or do we still not know where Brody’s true allegiances lie?

Ah, nope. We know where Brody’s true alliance lies at this point: With Carrie and his family and the good ole’ U.S. of A. Of the two things he leaves off his confession, Carrie knows about one of them (that Brody is a secret Muslim), and the second one seems more like one of those lapses that she would forgive him for once Brody becomes “a hero.” We don’t even know why the CIA would plan on killing Brody once Abu Nazir is dead, or why Brody’s life is contingent on Nazir staying alive…a plot device that will inevitably lead Carrie into letting Nazir escape so Brody can live.

4. What is the significance of Nazir’s CIA code name “Sandman”? Reference at least two of the following in your answer: “Mr. Sandman” by the Chordettes, “Enter Sandman” by Metallica, “The Sandman” by E.T.A. Hoffmann, the Sandman series by Neil Gaiman, the Spider-Man villain The Sandman.
1. In many of the Spider-Man continuums, William Baker/Flint Marko commits some criminal act in order for his daughter, Suzie, to live a better life, and in doing so sacrifices his life for hers. While Isa ended up dying, it was the impetus for Abu Nazir to wage a more personal war on American soil.

2. The Chordettes sing: “Give him a pair of eyes with a come-hither gleam, Give him a lonely heart like Pagliacci”:

In the Italian opera Pagliacci, the titular character is the iconic “sad clown” who sings to his audience that actors have feelings too. When his wife Nedda is unfaithful to him, he kills her. One could say that “Mr. Sandman” (in this case Nazir) created a “dream” for Carrie much in the style of the song; he has an unfaithful wife, and is constantly trying to convince Carrie and the CIA that he, too, is a human being. (“Do you believe me?” Brody asks Carrie. “Because that’s the only thing I care about.”) Although, unfortunately, Damien Lewis does not have “wavy hair like Liberace.”

5. These days Carrie seems to be holding it together slightly better with each passing episode. On a scale from one to electroconvulsive therapy, how far off the deep end will she fall if the CIA succeeds in killing Brody off?

It depends on how you define “crazy.” We saw what would happen if Carrie believes Brody is dead in the beginning of this episode … she handles it with remarkable professionalism. However, if she knew Estes and Quinn were behind it, it wouldn’t take much for her to go all vigilante on the CIA and start taking them out, one by one. Is that crazy? Maybe, but if Brody was gone, I doubt I’d watch the show either, which could effectively lead to them canceling the series and “killing” all the characters. 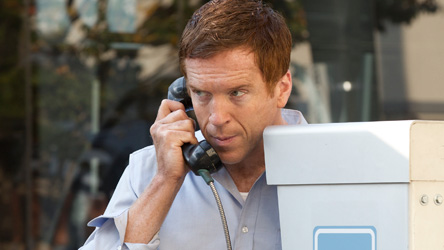