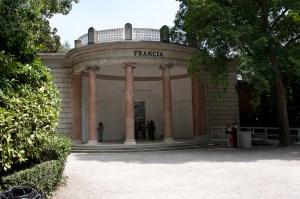 Though the leaders of France and Germany, François Hollande and Angela Merkel, are something less than great friends, the nation’s top curators seem to be getting along just swimmingly. The Institut Français, which oversees France’s Venice Biennale pavilion, announced that it will trade spaces with Germany at the 2013 biennale. Art Review first reported the news.

From the group’s release, which includes a statement of support for European unity:

“This move had been discussed time and again in the past decade, and this year the curators and artists chosen for the French and German Pavilions decided to start a constructive dialogue, eventually agreeing to exchange the spaces of the pavilions, without any specific artistic collaboration. International dialogue is a given in today’s art world, which seems much more defined by the meeting of cultural spheres than by the rigidity of national borders. Moreover, the curators as well as the artists feel committed to the vision of a common European culture in the larger framework of a global cultural community.”

Someone already made the wife-/husband-swapping joke.

Germany has said it will present Ai Weiwei, Romuald Karmakar, Santu Mofokeng and Dayanita Singh at the biennale. France is offering up Anri Sala.