Queens Democrat Grace Meng became the first Asian-American from New York to be elected to Congress when she defeated Republican Councilman Dan Halloran on Tuesday, but after her victory, she focused on her status as a female elected official rather than her background. In a speech before a room full of supporters and local officials at the Sheraton LaGuardia East last night, Ms. Meng emphasized the importance of electing women to government office and voiced her support for the middle class rather than trumpeting her win as a watershed moment for Asian-Americans.

“Tonight is historic in that we’ve taken one small step in getting more women elected to government,” Ms. Meng said as she addressed the room. ”More women in government means practical attention on how families educate their children, how they pay their bills, how they worship, how they participate in their community, and how they plan for the future.“This election cycle saw 30 Asian-American candidates launch bids for Congress, up from 10 bids in 2010 and eight in 2008, according to the Asian Pacific American Institute for Congressional Studies. Meng’s victory in Queens echoes this larger trend toward representation for Asian-Americans in national politics, but her campaign was quick to expand the significance of the election beyond her identity as a Chinese-American.”There’s no denying that her candidacy is historic,” said Austin Finan, a spokesman for Meng. “But as proud as Grace is to be a Chinese-American woman, she’s equally as proud to be a woman, a mother, and that speaks to the people in the district who are not Asian-American.”

“The new generation of Asian-Americans, Grace’s generation, they were born here,” Mr. Koo said. “They speak good English, they are a bridge between the two cultures, and they are good representatives for Asian-Americans as a result.”Regardless of how her campaign casts her historic election, Meng’s influence in her district is palpable, and it dominated the polls. Martha Taylor, the Democratic District Leader, was handing out palmcards for Meng in the predominately South Asian neighborhood of Jamaica Hill earlier that day.“There was such a positive reaction,” she said. “People would just smile, and a few people who didn’t take cards made a point of coming out and reporting that they voted for Grace.”

The newly minted congresswoman is not the first in her family to make history: her father Jimmy Meng was the first Asian-American to serve in the New York State Assembly. Mr. Meng was arrested in July for allegedly soliciting $80,000 in cash from a criminal defendant in order to bribe Manhattan prosecutors. Meng asserted her independence from her father, saying that she was “shocked and deeply saddened” by the allegations against him. After her June primary victory Meng thanked her parents for being her “moral compass” as she was growing up.

She thanked her parents again Tuesday night, and promised to bring an aross-the-aisle sense of responsibility to the seat.

“Standing for common sense government, reform and accountability; restoring trust in our government,” Ms. Meng said. “These are the tasks ahead of us.” 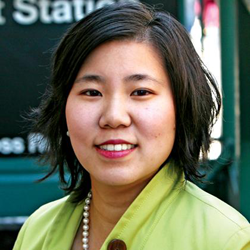