The Rabbinical College of America has announced that it will honor Livingston resident John F.X. Graham with its prestigious Honorary Doctorate Award. The award will be presented at the College’s National Founder’s Dinner to be held on Tuesday, Dec. 4, at Meadowlands Sheraton.

Founder and CEO of Fairview Insurance in Verona, Graham served as national finance co-chair for Hillary Clinton for President and state director for John Kerry for President.

Before entering the insurance industry, he was a public school teacher in the Philadelphia School District.

“Our teachings stress that individuals, no matter their faith, have an opportunity and responsibility to leave an imprint on the world around them by working to improve the lives of others,” stated Rabbi Moshe Herson, dean of the Rabbinical College of America. “In getting to know not only John Graham, but more importantly his extended network of family, friends, and colleagues, it is evident that John embodies this important trait.”

“The Rabbinical College of America has launched so many great young people into an adulthood of service to community and love of their fellow man,” said Graham. “As I watch my children and grandchildren grow it becomes more important to me that we leave a world greater than the one we were born into. I am humbled that this honorary degree brings me closer to thousands of years of history and tradition, and shows that there is so much more that unites us all than divides us.

Phillip Sellinger, a longtime friend of Graham’s, echoed Rabbi Herson’s comments at a recent reception he hosted at which Graham was announced as this year’s recipient.

“Without question, John is a force of nature and is larger than life. His compassion for every person; his love for his family; his unwavering commitment to serving his community and to smart, good and sensible government; and his ability to connect in a meaningful way to everyone who comes in contact with him, is truly remarkable,” stated Sellinger. “I, along with so many others in his circle of friends, are incredibly fortunate to have John as a confidant and mentor.”

“It is no mistake that with this honor John joins the ranks of some of the greatest business leaders, statesmen, and philanthropists this nation has to offer,” commented Al DeCotiis, a longtime friend of John’s, and a partner with the prominent N.J. law firm of DeCotiis, FitzPatrick and Cole, LLP. “John has bettered the lives of so many around him, and not a day goes by when he doesn’t put effort into service to others.”

In 2011 Israeli Ambassador to the United States Michael Oren received the Honorary Doctorate from the Rabbinical College of America. Other past recipients of the Honorary Doctorate Award include President Gerald Ford, President Jimmy Carter and Mrs. Roslyn Carter, Ambassadors Michael Oren and Ronald S. Lauder, Secretaries of State Henry Kissenger and Alexander M. Haig, Jr., five United States senators, the past seven governors of the State of New Jersey, and business leaders such as David T. Chase, President of Chase Enterprises, Jack Futterman, former Chairman and CEO of Pathmark Supermarkets, and Miles and Bruce Berger of Berger Hotels. 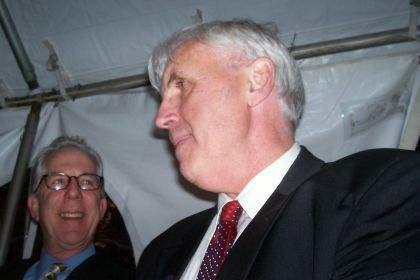