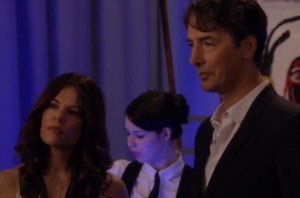 We don’t profess to be experts on Gossip Girl but we try to tune in when it collides with Planet Art. Last night featured a cameo by the artist  Richard Phillips, appearing with Art Production Fund cofounder Doreen Remen, so here we go!

The cameo occurs at minute 26, and you can watch it on the CW website, which doesn’t seem to be working very well, or on this pirate one.

To give you the back story, which we do not have in its entirety: a character (let’s call him MAN) is upset because someone else (his EX-WIFE?) somehow scheduled an APF gala the same night as his gallery opening. You’d think he could just reschedule the opening, but it turns out it’s a problem more easily solved by buying a Richard Phillips painting for $1.1 million at a charity auction.

Here’s a transcript of the cameo, at the gala:

DOREEN REMEN [to MAN]: I like that your artists reflect the same socially relevant projects we commission at Art Production Fund.

MAN: And I like that you can see the street art influence. I’m not talking about the ’80s, but the ’40s. Dubuffet, Pollock, Ray Johnson.

RICHARD PHILLIPS: …when artists were the stars of New York. Instead of celebutantes.

If you follow Mr. Phillips’s work, or Gossip Girl, you know that he has a close relationship with the show. His work first appeared on it in 2008 and he painted a few of the stars for his “Most Wanted” teen icon series.