It is a challenge that got a lot of people thinking. The city received 117 proposals from 52 different countries, providing the city with a wealth of ideas—some practical, some fanciful. Impromptu complexes of honeycomb hexagons, floating villages on piers, barges, even a requisitioned cruise ship. Flat-pack solutions (think an IKEA box) that blossom like an accordion or pop up like Transformers. Giant Erector sets, a few inflatable models like one of those carnival bouncy rides. There was even a fleet of flying dirigibles, each with an apartment inside, that could float above people’s homes. The city selected 10 winners and 10 runners-up in September 2008, that are featured on a site, whatifnyc.net. It is a blueprint for recovery.

“We hope this will serve as a guide for best practices, not only for New York but the entire nation, and the world,” Mr. Brown, the CUNY professor, said.

After much fanfare around the competition, the project seemed to go dormant, but only because it went underground. Mr. Burney explained it was best to work on the project in private, so as not to alarm the public about the possibilities of a disaster, and to have the freedom to let the design develop.

“Because of the broad range of entries, there was a lot of work for the city to do to turn it into something,” said Paul Freitag, a competition juror who is a managing director at the Jonathan Rose Companies, one of the city’s top affordable housing developers.

After briefly mulling barges, blimps and cruise ships, the city settled on the humble shipping container, which a number of entrants had proposed. “Logistically, it’s not as though you’ve got a bunch of cruise ships lying around that you can requisition,” Mr. Burney said. But he did point out that barges are not as ridiculous as they might sound, either. After all, the Department of Corrections operates the gigantic Vernon C. Bain prison barge, moored off Hunt’s Point in the Bronx, which houses up to 800 prisoners.

“We kept coming back to the shipping containers, because they’re a fairly known quantity in terms of technology and even design,” Mr. Burney continued. “It’s rather cool these days to have a house made out of a shipping container.”

In 2009, the city released a request for expressions of interest, to see who might be game to undertake such a project, or even if it was possible. Meanwhile, the agencies went about the regulatory work of getting such a system funded and executed, no easy process given the added layers posed by the Army Corps and FEMA. “We’ve had to submit things two and three times,” Sea Box’s Mr. Begley said. “We work with government a lot, so we know what it’s like, and it’s nobody’s fault. You get these commanders who come through for six months, and when they move on, you may have to start again. It’s just how the bureaucracy works.”

On the city side of things, everything had to be debated: Should there be sprinklers? Should it be compliant with the American’s Disabilities Act? What if it violates the zoning code, with the construction of a building larger than zoning would allow, which seems also assured were a five or six story building to be assembled on a parking lot near the beach in, say, Queens or Staten Island, where zoning calls almost exclusively for low-lying single family homes.

Time has even been spent on figuring out if and how to decorate the containers. They could be painted different colors, creating interesting patterns, an inviting kaleidoscope of corrugated steel. Decals or designs could be added to the exteriors, as well, creating makeshift murals. “We want these to be an attractive place to live, to help foster community,” Mr. Pawlowski said.

The city has worked closely with Sea Box on the project, but it has not yet given the final go-ahead to the firm’s plan, which would involve producing about 15,000 units, dispersed around the country in clusters of 500 to 1,000 units. The way Sea Box sees it, the units would sit in a lot somewhere until they are needed, be that in New York or L.A. or Minneapolis or Sioux Falls. “An ISO container will last 35 years, and you can reuse it 20 times,” Mr. Begley boasted. “The old FEMA trailers, tie them up for a year or two and they’re through.”

Those 15,000 units would supply the city for a month or two while production ramped up if more were needed—the city expects to contract with numerous contractors to produce these units. Following the program, they would be broken down, retrofitted and put back into storage for the next disaster.

While the program has been built with New Yorkers in mind, City Hall believes it could serve as yet another model for cities around the country, just like the smoking ban has. “We’ve created a universal specification of what we believed anyone in the container industry could use,” Commissioner Bruno said. “It works in New York City, but it could probably work anywhere, so it has national implications.”

If only it had been ready a year ago. “Certainly I would have liked to have seen it happen sooner, but that’s just the process,” Commissioner Burney said. “As the mayor keeps saying, this isn’t going to be the last storm we see.” 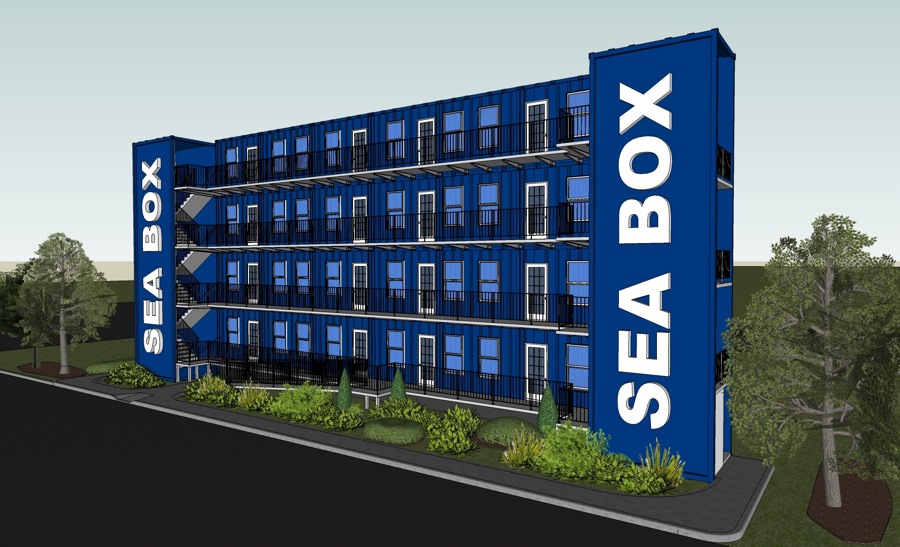