Sandy’s gone but techie do-gooders are still coming out of the woodwork with new relief efforts. The latest: Popular photography blog Humans of New York is devoting the next ten days to chronicling the hurricane and its impact. It’s pretty much impossible to see the images without wanting to help. And so the site is also partnering with Tumblr to raise money for the afflicted, with an Indiegogo fundraiser.

To help out HONY’s efforts, Tumblr is donating swag for donors, as well as pushing traffic toward the Humans of New York announcement with a friendly reblog.

Indiegogo tells us that, within twelve hours, the pot was already up to $86,000, with donations from 1,300 people in 130 countries. The average contribution is $63 (enough to score a Humans of New York print). All the money goes to the Stephen Siller Tunnel to Towers Foundation.

All told, Indiegogo fundraisers have netted $340,000 for hurricane relief efforts. That’s a lot of dough. 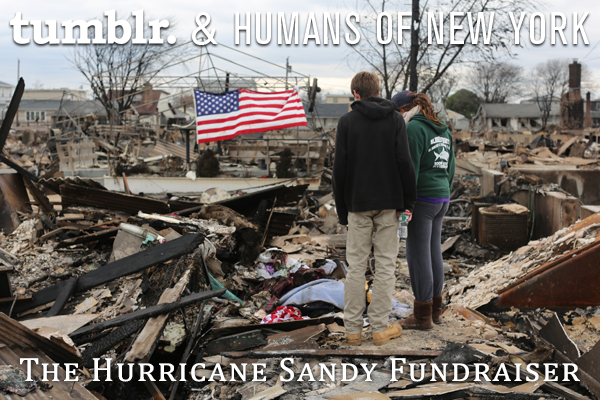