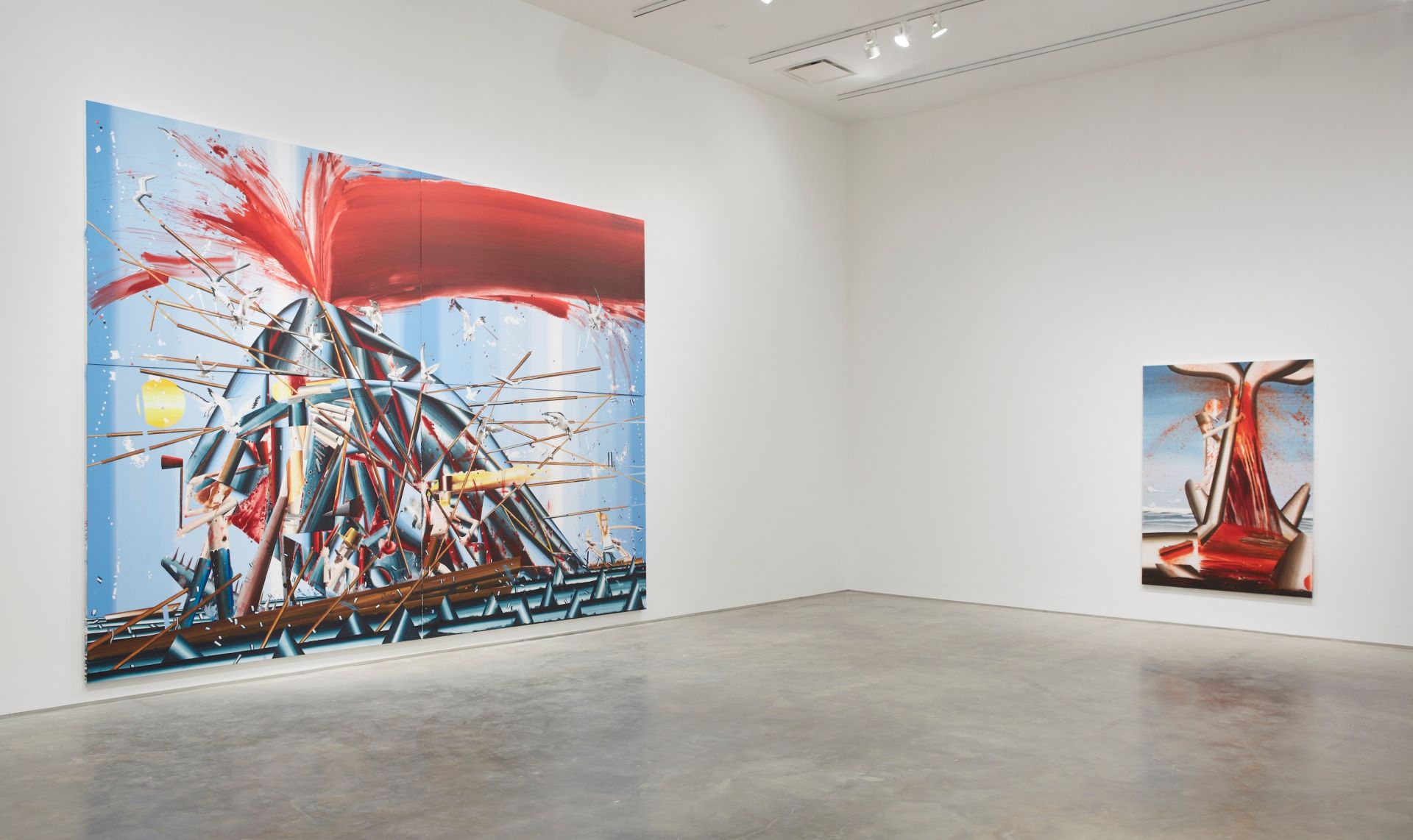 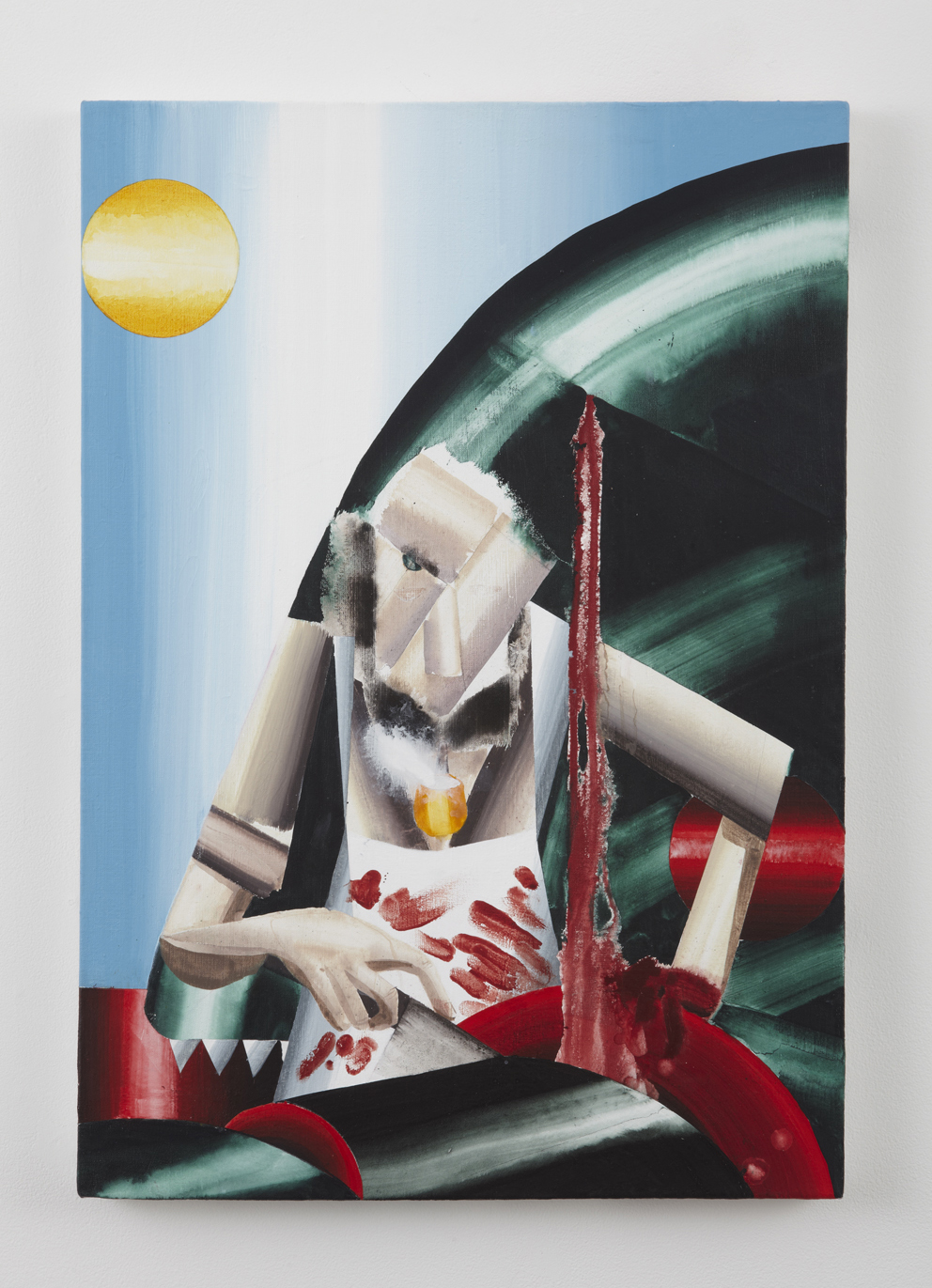 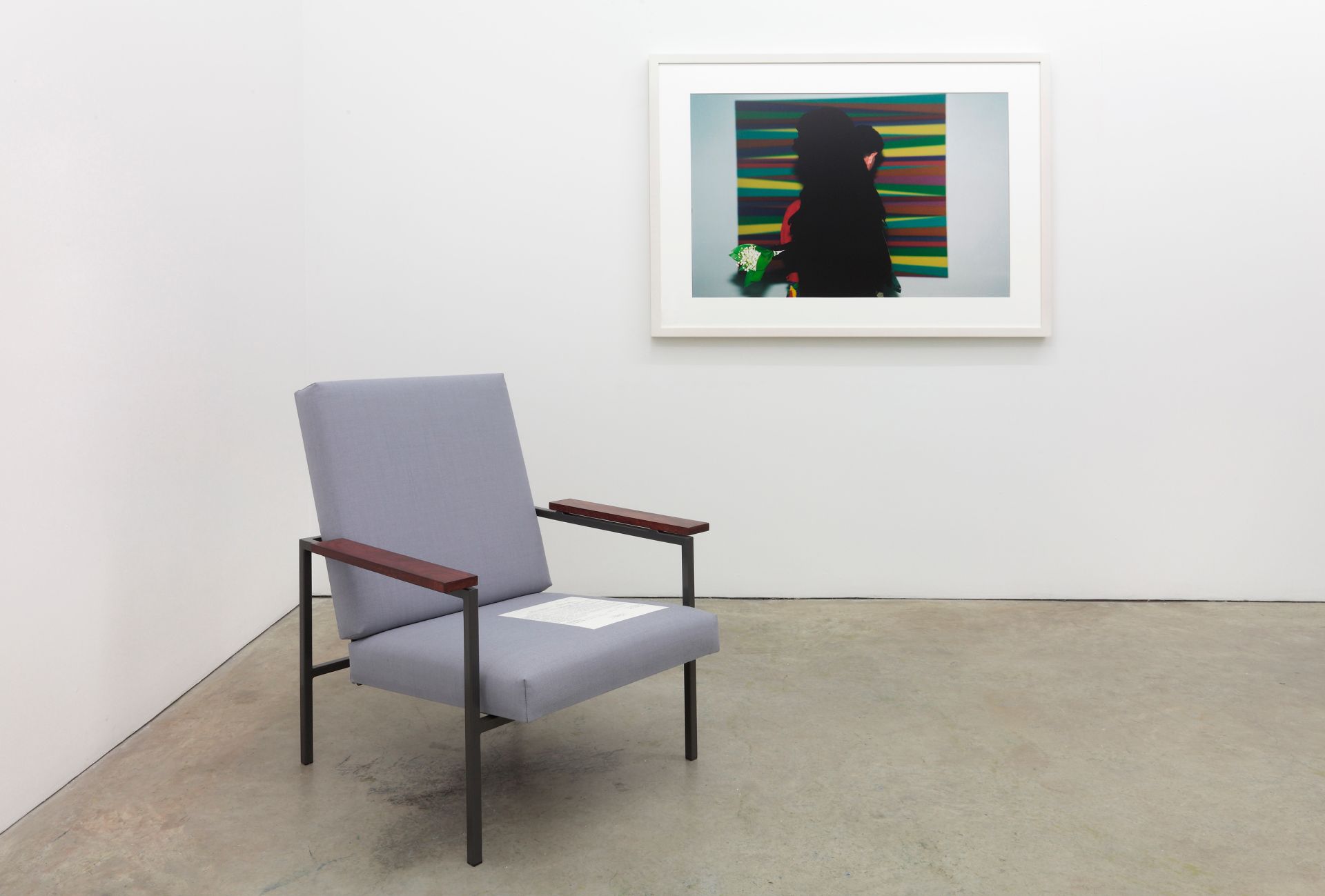 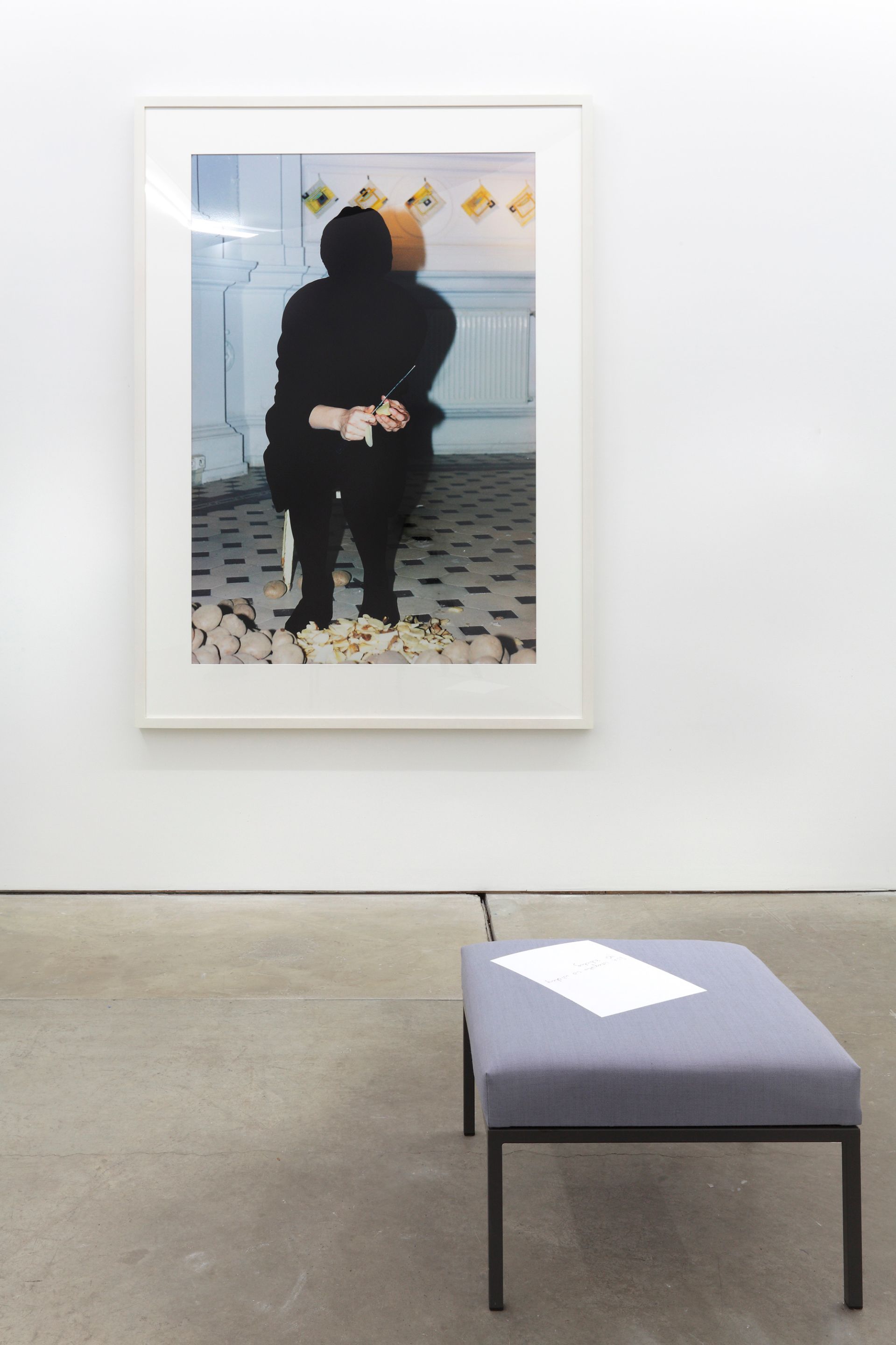 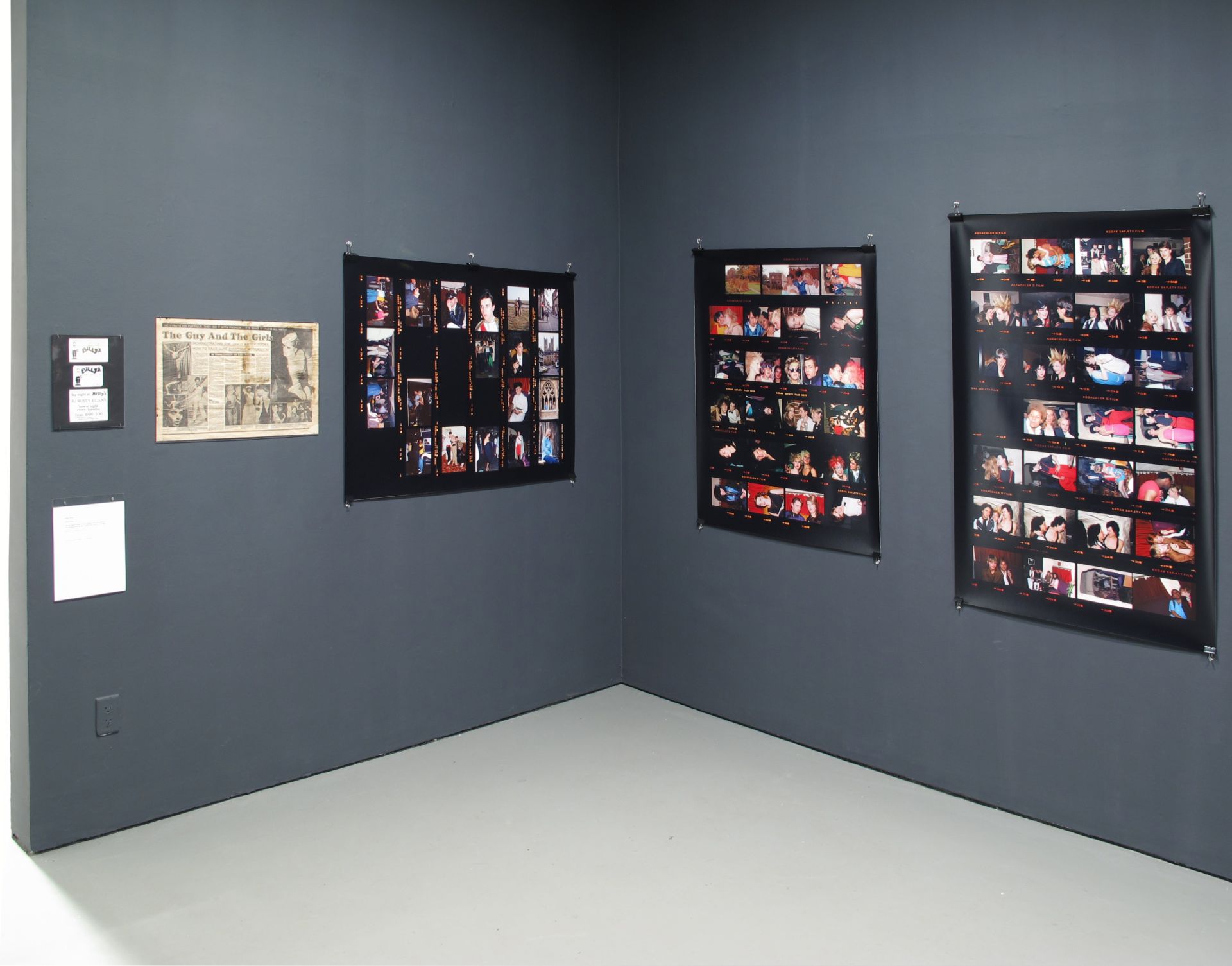 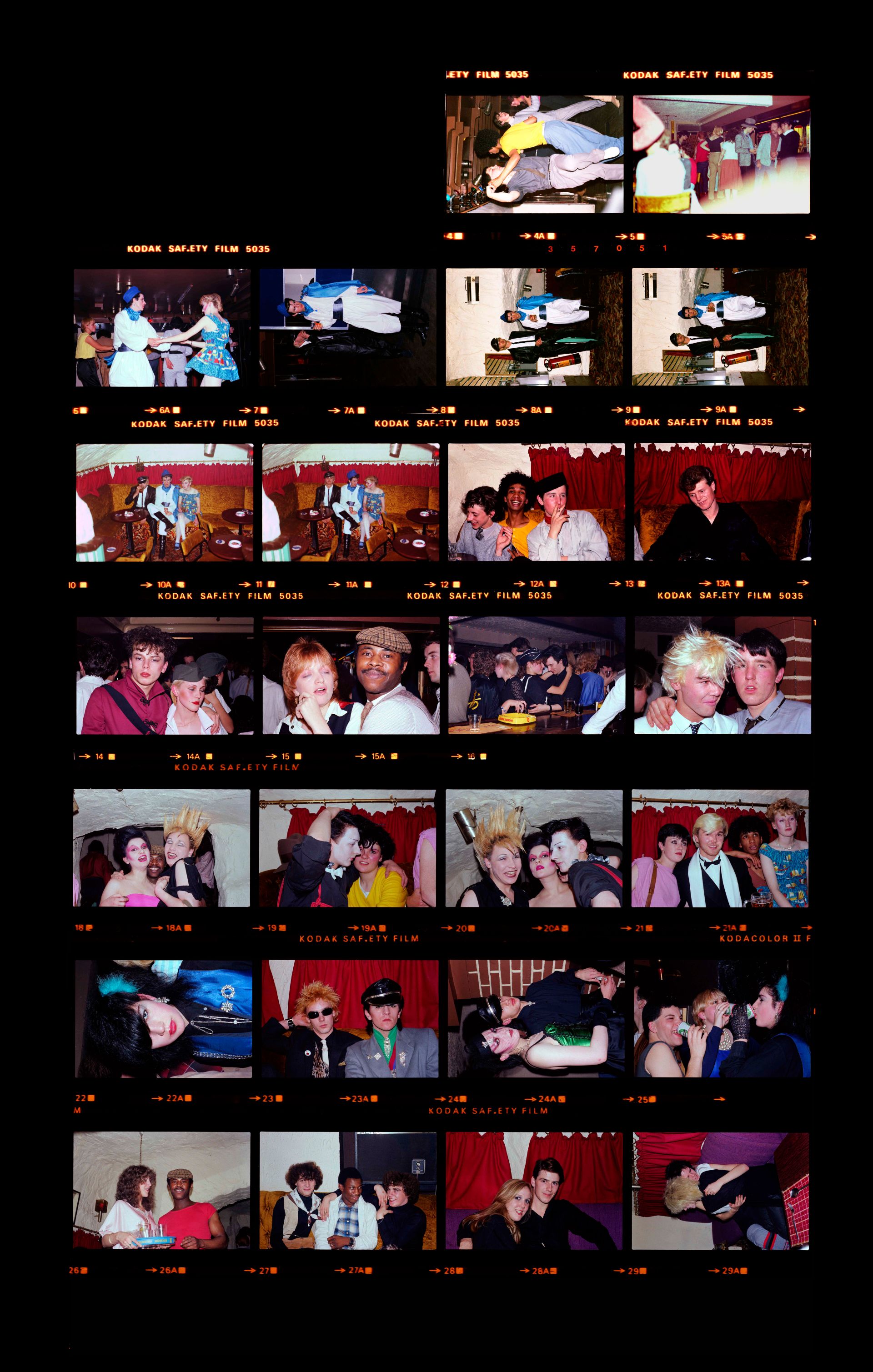 Courtesy of the artist and Petzel, New York 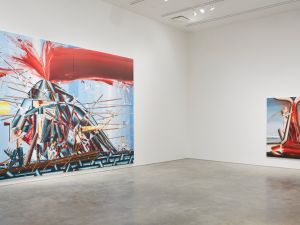 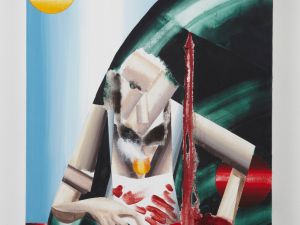 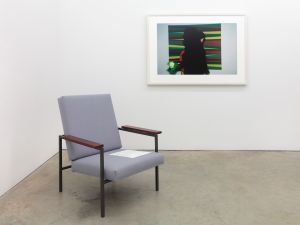 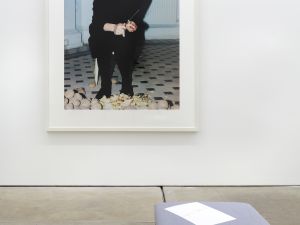 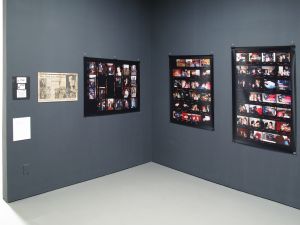 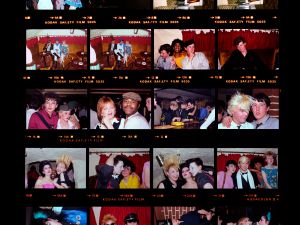 Barnaby Furnas paints in a different time. The flensers, oarsmen and harpooners who skulk dangerously through “If Wishes Were Fishes,” his new show at Marianne Boesky, are from the 1850s. Shirtless, in stovepipe hats and gray black hip boots all modeled with the same exaggerated sheen, smoking pipes and wielding bloody axes, they have all the dignity of rats in stolen jewelry. The landscape is strictly second day of creation: a firmament has been placed amidst the waters, dividing upper from lower, but its effect is still fresh and untested.

The primordial whale, whether swallowing Jonah, being sliced up à la Herman Melville and the pre-petrol economy, or leaping through the middle of his 12-by-16-foot masterpiece The Whalers (all works 2012), dates back before the Second Temple, to a time when we could still reach God with animal sacrifice.

Mr. Furnas uses acrylic, dye and “-dispersed” pigment, a process that falls somewhere between a stain and a controlled drip. Scenes of combative geometry, in which cylinders and triangles clash, take place before smoky bleeds of color. (Red is usually the first color we name after making the distinction between dark and light.) Eight graphite drawings also work back from sharp edges, as if drawn with a magnet, a ruler and a small tide of iron filings.

In Jonah in the belly of the Whale, the famously reluctant prophet, elsewhere refracted through the life of Jesus (in Jonah and the Whale #2, he stands on the in the whale’s mouth, looking up to a new God very much in his own image), is the newly created human of the second chapter of Genesis. The perspective, as with the vertically striped blue and white sky of The Whalers, is sideways: a shadowy, horizontal figure looks out of the womb between taut red edges. Blood is not bound within single bodies, but comprises the world. Circles of red or black dot the shimmering, “-dispersed” figure to mark out eyes, nipples, navel and urethra, as if the body’s points of entry are realer than the body they give entry to. This figure, from its own point of view, divides the world into two halves, and naturally projects its own mysterious, bilateral symmetry into heaven. But the whole that the figure floats in knows that it can’t be substantially altered by such a brief internal interruption.

In The Gutter #1, Mr. Furnasfurther revels in the carnal violence with which infantile sexuality readies itself for the placid dichotomies of adulthood. Against a calm sky and low clouds, beneath a white sun that might be only a painful gleam of brightness in a captain’s spyglass, another top-hatted, pipe-smoking butcher, his white apron marked up and down with red thumbprints, cuts into an erect, floral tail fin: the leg-like secondary fins and river of blood flowing toward the viewer make for a potently ambiguous scene that could be read equally well as a birth and as an Oedipal castration.

But maybe it would be more accurate to say that Mr. Furnas paints against time. The Whalers comprises four separate but tightly adjacent canvases across whose edges the image may or may not continue neatly—one blood-speckled, black-and-white seagull disappears into the crack, but the hideously momentous tunnel of blood shooting out of the whale’s blowhole is hardly jogged—and centered on a prismatic chaos of bluish-black whale flesh and steel-tipped wooden harpoons. It looks something like a stop-motion animation made with paper cutouts, with all the frames projected at once.

POLISH-BORN, LONDON-BASED artist Goshka Macuga works with history. For a recent show at Warsaw’s Zachęta National Gallery, currently being reprised, in part, at Andrew Kreps, she began by looking back to an earlier show at Zachęta. That one, assembled by the esteemed European curator Harald Szeemann in 2000, included Maurizio Cattelan’s La Nona Hora (1999), a wax-museum fantasia that shows the late Pope John Paul II, beloved son of fiercely Catholic Poland, being felled by a meteor.

Ms. Macuga’s Triptych (Cattelan) (2011) documents, in three C-prints, some of the damage done to the Cattelan piece by protesters in Warsaw. Three more devastating color photos, called “anti-collages,” show artists Julita Wójcik and Monika Szewczyk (both had their own run-ins with public anger and censorship) and Anda Rottenberg, the Zachęta’s director during the Szeemann show, blotted out under silk-screened black silhouettes. Because Ms. Rottenberg’s father was Jewish, much of the hate mail that followed the show was directed to her personally; she kept it, and Ms. Macuga incorporates several sheets into four pieces of handsome gray institutional furniture: Daybed for the Spirit of Polish Culture (2012), for example, has a long letter pressed into its surface that begins by accusing Ms. Rottenberg of working for the Mossad; Not Everything I See Is Art (2012), on the other hand, is a low square stool whose single sheet of inset paper says only that.

What gives the show its tremendous pathos is the almost total impotence of sophisticated psychological defenses in the face of brute force. The show’s largest piece, The Letter (2011), is a tapestry of a photograph of Ms. Macuga’s reenactment of a 1967 happening by Polish artist and theater director Tadeusz Kantor: seven postmen with long poles carry a banner addressed like a letter to the Zachęta. The tapestry is hung on a special wall built diagonally across the gallery space, so you can’t possibly miss it. You can’t, but so what? What’s done is done, and everything leaves a mark.

NICOLA TYSONS’S “The Birth of the New Romanticism and the London Club Scene of the 1980s,” showing at White Columns along with paintings by Jane Corrigan and Wayne Koestenbaum and sculpture by Joe Fyfe, has an altogether different pathos. Ten poster-sized faux contact sheets of full-color photos taken by the artist or her sister at Billy’s Club in London, during a series of “Bowie Nights” in 1978, include Boy George, Simon Le Bon and a variety of other faces, known and unknown, all of them posing with the same shiny, earnest youth: this is the pathos of innocence, incorruptible in itself but, nevertheless, no longer here.