The first poll numbers have surfaced out of what promises to be a contentious Jersey City mayoral race and these numbers at least favor incumbent Democrat Jerry Healy.

An internal poll conducted by the Healy camp has the incumbent mayor up 14 points over challenger Steve Fulop, 39 percent to 25 percent with 36 percent undecided.  The race is six months away and neither side has begun to campaign in earnest.  Fulop holds a heavy fundraising lead over Healy.

According to the poll, Healy leads in every ward in the city with the exception of Ward E, which Fulop represents on the city council.

The internal poll puts Healy’s favorability at 61 percent versus 31 percent who have an unfavorable view of the mayor.  Voters also have a positive view of the job Healy is doing, with 63 percent positive and 31 percent negative.

Though the poll says a third of voters don’t know enough about Fulop to rate him, those that do have a favorable opinion of the councilman by a 47 to 18 margin.

Asked to comment on the poll, Fulop said it “wreaks of desperation.”

“It’s no coincidence that this poll was leaked two days after they lost Ward F,” Fulop said.  “This was a really aggressive push poll and nothing in Jersey City speaks to this poll having any merit.  We have our own polling, which is much more consistent with what has happened in the last six elections, all of which their candidates have lost.”

The poll is based on a survey of 600 likely voters from across the city and has a margin of error of +/- 4 points. It was conducted via telephone between Oct. 5 and 8.

The poll was commissioned by the Healy camp and conducted by Hamilton Campaigns. 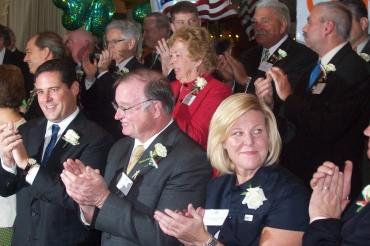