There’s been much to-do over the Barneys holiday windows that were unveiled this week. While last year’s amazing and somewhat controversial Lady Gaga collaboration pushed the envelope, this year, for some baffling reason, the retailer decided to partner with Disney.

Luis Fernandez, senior vice president of creative for Disney Consumer Products, had said that concept behind this collaboration made total sense from a retail perspective. “We thought, ‘A huge force in fashion and a huge force in animation,” he said in a recent interview. “What better than for these two companies to get together and do something for the holidays?'”

But controversy began to swirl like a wintry storm back in August, when images from the five-minute “Electric Holiday” short now playing in a constant loop in Barneys windows appeared on WWD. The pictures showed a tall, lithe Minnie Mouse wearing Lanvin, which served as an immediate call to arms from plus-size advocates and celebrities, who slammed the “Skinny Minnie.” Dancer Ragen Chastain circulated a petition trying to get Barneys to “Leave Minnie Mouse Alone!“

However, there were no protests, nor a drop of mouse blood thrown during the unveiling of the windows last Wednesday night. Sarah Jessica Parker, who makes a cameo in the video, presided, and all was quiet, including the windows themselves. Not a figure was stirring, not even the world’s second most famous mouse.

There were no Gaga-esque light shows, nor intricately animated puppets performing a Christmas tableau. No animals riding animals, no snowflakes, no animatronics.

Instead, passersby were treated to the above video of Minnie imagining herself at France’s Fashion Week– alongside other famed fashion (real and imagined), including Suzy Menkes, Linda Evangelista, Cruella DeVille, Juergen Teller, Anna Dello Russo, Captain Hook, and the Chesire Cat.

The Disney-Barneys collaboration is a far cry from Barneys’ usual holiday fare. Last year’s Gaga Workshop resembled a Charlie and the Chocolate Factory-by-way-of-Madonna explosion of exhibits and interactive amusements. You could purchase chocolate shoes! Disco stick lollipops! One window was just filled with hair as a tribute to the musical. Another had Gaga sitting astride a giant unicorn in a semi-digitized wonderland. The collaboration even extended to a micro-site, the 12 Days of Gaga. (The site is currently being used to house the “Electric Holiday” video.)

“You know, Barneys always does funky stuff,” said a town car driver leaning against his ride, watching the display while waiting for pickup. “That Lady Gaga window last year was wild. This is …” He paused. “This is fine.”

When we passed by the following night, a guy was taking a video of the entire movie with his iPhone. A woman in Chanel glasses hung back on the sidewalk with a friend. We asked her what she thought.

“Oh, it’s good,” she said, shrugging. “I just don’t know who that person is supposed to be.” She was pointing to a shot from the runway scene, where a cartoonified version of fashion blogger BryanBoy wearing Mickey Mouse ears watched Minnie strut her stuff.

Fears that the movie would incite cases of a Minnie-related eating disorder seemed unfounded, as two European tourists attempting to interest their daughter in the video were ignored. She pulled them along, remaining uninterested in Skinny Minnie.

Ultimately, the Barneys holiday windows hardly seemed different from the video displays littering Times Square, except for the fact that the luxury store was working on a much smaller scale. It was, we surmised, as far from “high couture” as you could get. We decided to get a reaction directly from the source. For the first time in our lives, we actually went looking for one of those overly confrontational suit-wearing characters in Times Square, and spent 20 minutes thrust in a world of life-size Woodys, and Hello Kittys, and one guy dressed as Batman.

Finally, we ran into Minnie Mouse, with Mickey trailing behind her. We stuffed two dollars into her damp, synthetic fur paw and asked her, “How do you feel about Barneys making you into an anorexic model, Minnie?”

She responded with a pose, her dead, lifeless eyes boring into our souls: Well, if she didn’t seem to mind, neither would we. 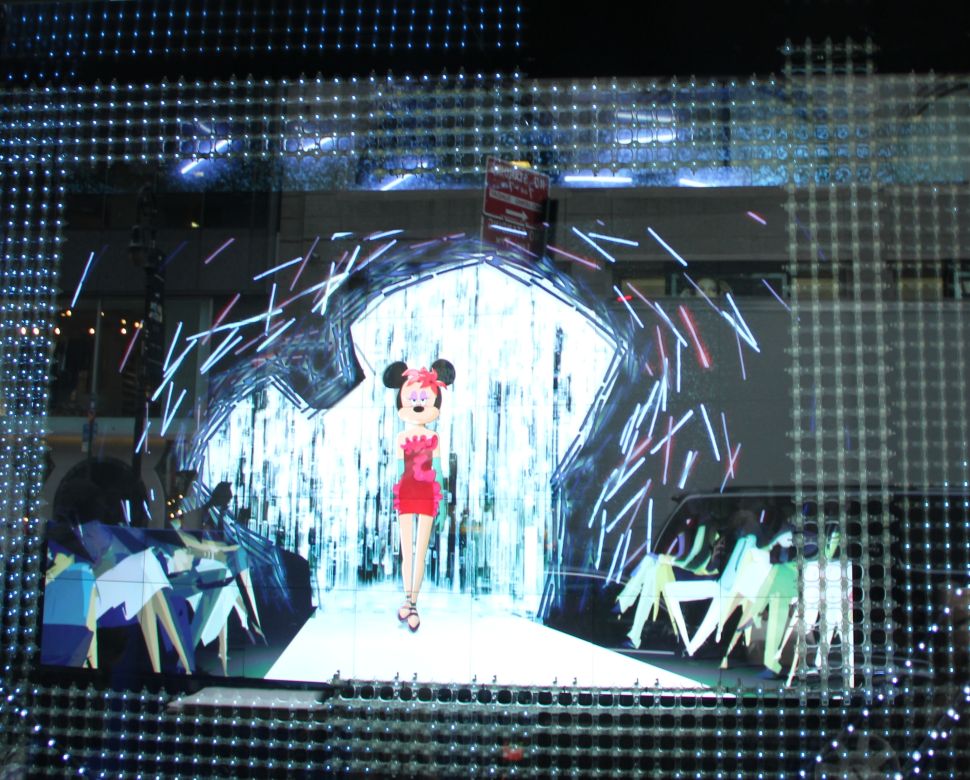