Today was a big day for Staten Island Borough President James Molinaro. Two weeks after he was on NBC complaining his borough was being ignored in the wake of Hurricane Sandy, Mr. Molinaro spent a substantial amount of time talking with President Barack Obama as the commander in chief toured areas of Staten Island that were devastated by the storm. Mr. Molinaro also encountered a man who is apparently a very, very big fan of his work.

As Mr. Molinaro chatted with Mayor Michael Bloomberg on Cedar Grove Avenue while the president talked with residents, a man in a sweatshirt called out to him.

“You going to run again Jim?” the man asked.

“I can’t,” responded Mr. Molinaro, who is term-limited.

“The man next to you could make it happen,” the man said gesturing toward the mayor.

When he won his third and final term, Mr. Molinaro said he hopes Councilman James Oddo will succeed him in the borough president’s office. We’ll see if Mr. Oddo is able to inspire the same level of ardent devotion among Staten Islanders. 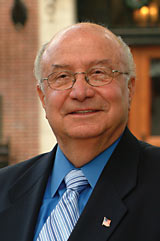