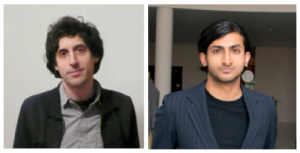 Jay Sanders and Nav Haq have been selected as the 2012 winners of the Independent Vision Curatorial Award by Independent Curators International (ICI). Mr. Sanders, curator of performance at the Whitney Museum in New York, and Mr. Haq, a curator at MuHKA in Antwerp, Belgium, were selected by Hans Ulrich Obrist, co-director of exhibitions and programs and director of international projects at the Serpentine Gallery in London. The award goes to emerging curators from around the world who have demonstrated “exceptional creativity and prescience” in organizing exhibitions, conducting research and for related writing. The biennial award comes with a $4,000 stipend to support the curators’ independent practice.

The two were chosen from a shortlist of curators who were nominated by 15 internationally established curators, including RoseLee Goldberg, founding director of Performa, Sofia Hernández Chong Cuy, curator of contemporary art for Colección Patricia Phelps de Cisneros,  Jens Hoffmann, director of the Wattis Institute for Contemporary Arts, and Matthew Higgs, the director and chief curator of White Columns.

Mr. Haq has previously been a curator at Arnolfini in Bristol, England, and Gasworks in London, and has curated many solo projects with artists, including Hassan Khan, Cosima von Bonin and Kerry Tribe. Mr. Sanders has been a gallery director at both Greene Naftali and Marianne Boesky in New York. Most recently, he co-curated the 2012 Whitney Biennial with Elisabeth Sussman.

“Each curator is establishing a unique voice, developing their practice by initiating projects independently, as well as having worked in a diverse range of institutions,” said Mr. Obrist in a statement. “Nav Haq frequently takes us into the polyphony of art centers, creating shows and projects that broaden the scope of our thinking. Jay Sanders stays close to artists, gaining a strong understanding of an artist’s body of work—both emerging and overlooked—so that ultimately audiences can know an artist deeper.”