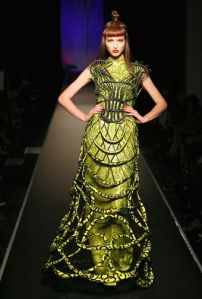 The traveling exhibition “The Fashion World of Jean Paul Gaultier From the Sidewalk to the Catwalk” will make an East Coast stop at the Brooklyn Museum in October, 2013. Some of Mr. Gaultier’s art world connections include designing costumes for photographs by Richard Avedon, Cindy Sherman and Andy Warhol, among others.

The exhibition, which focuses on the designer’s work from the mid-1970s to today, started at the Montreal Museum of Fine Arts and is currently on view at the Fundación Mapfre – Instituto de Cultura in Madrid.