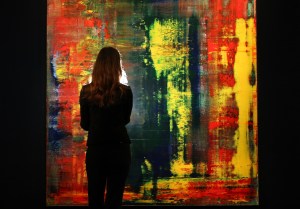 If you’re a dedicated reader of Jerry Saltz’s column in New York magazine, or his Facebook page, you know that the art critic takes issue with the ever-increasing prices seen at auction houses these days and has put out a call to talented forgers to make recreations of works by some of his favorite artists.

This week, Mr. Saltz details his quest for a Richter abstract painting, slightly below the artist’s record of $34.2 million. He lucked out with an e-mail from artist Stanley Casselman, who managed to craft some very fine looking replicas (see slide show here) in his Jersey City studio.

They were perfect! Or nearly perfect. From the story:

When Stanley opened his door, I saw what looked like 50 large Gerhard Richters. I immediately had fantasies of getting rich, of opening a Fake Richter shop with him. Then I started looking more closely. All of the paintings seemed Richterian, but many had an Impressionistic, un-Richterian prettiness. Many looked too thought-out. Accidents looked intentional rather than discovered. His decisions stood out instead of taking me by surprise. Richter—who applies paint in scrims, in layers that emerge through one another—controls accident with a physical intelligence and subtle changes of direction and touch; his decisions are in an incredible call-and-response relationship to accidents. His abstract paintings look like photographs of abstract paintings. This creates glitches in your ­retinal-cerebral memory, so that you perceive this uncanny space between abstraction, accident, photography, process, the nature of paint, and painting. These didn’t.

Then, suddenly, one made my heart beat faster. Stanley grimaced. “That one’s not my best,” he said. “You’re wrong,” I told him. Then another struck me. He winced again, saying, “That’s a reject that had been cut out from another work.” Then I understood that only when Stanley stopped thinking he was making a Richter could he make one. We had a deal: Stanley signed his name prominently on the back of each, and I paid him, put them in my car, and drove home.

Mr. Saltz reports that he “love[s] living with” the paintings.