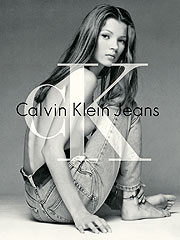 Well this is just great news. Kate Moss told the Belfast Telegraph that she has an original Lucian Freud tattooed on her hiney. (Thanks to Blouin Artinfo for digging this one up.) Freud, who died last year, did the body art himself when Ms. Moss posed for him in 2002. The tat depicts two swallows and is located at the base of her spine.

Here’s what Ms. Moss had to say:

“I said I liked birds and he replied, ‘I’ve done birds. I’ve done it in my book.’ And he pointed down at a painting of a chicken upside down in a bucket. And I said, ‘No, I’m not having that.’ And then he said, ‘Maybe I should just do you.’ And I thought, I’m not going to have a girl on my a***. So we decided on a flock of birds. It’s an original Freud. I wonder how much a collector would pay for that? A few million? If it all goes horribly wrong I could get a skin graft and sell it!”

Horribly wrong, indeed. Admittedly, the art world has scored big points on this one.