Brian Donnelly, the artist who goes by the pseudonym KAWS, first created “Companion”—a black and gray figure that kneels with its hands covering its face and resembles a ghoulish praying clown crossed with a dead Mickey Mouse—as a toy that stands about eight inches high. This was in the late ’90s, when KAWS was tagging advertisements in bus terminals and phone booths. He had the toy produced in an edition of 500 and made them available for sale in the shop at the New Museum, in New York.

Since then, Companion has made the trip around the world and gotten a little fatter and taller along the way. A 16-foot sculpture of the character traveled last year from Hong Kong to Connecticut, was parked for a few months outside the Standard Hotel on Manhattan’s West Side, and went on to the High Museum in Atlanta. It is currently hanging out at the Modern Art Museum of Fort Worth. On Thursday, Companion will have its biggest exposure to date—as a balloon in the 86th annual Macy’s Thanksgiving Day Parade. It will be 41 feet long, 24 feet wide and 28 feet tall.

“For me, the parade was more Thanksgiving than Thanksgiving was,” Mr. Donnelly said in his studio in Williamsburg last week. He’s been making art for 20 years, but you wouldn’t know it from looking at him. At 38, he is baby-faced and has a nondescript style—black shirt, black pants, black cap—that doesn’t age him. In the studio, assistants were putting the finishing touches on a series of bright paintings that didn’t serve any particular end besides Mr. Donnelly wanting to “see where they’re going.” There were maquettes of Companion scattered about the room, a friendly dog resting on a cushion and, near the entrance, a small, stout statue of Charlie Brown, everything about him pretty faithful to the cartoon except his head, which was shaped like that of Mickey Mouse.

“I’ve always really loved cartoons,” Mr. Donnelly continued. “They’re kind of actors who never get old. They just have these lives and these cycles of interests. When I first started going to different countries, I went to Japan, and a lot of kids didn’t speak English. But they knew all the same cartoons. You’d go ‘D’oh’ and they’d know you were talking about The Simpsons. You could be in a street market in Mexico City, and they’d have little SpongeBobs made out of papier mâché.”

He cites the Michelin Man as a major influence. (“He had nothing to do with tires! You think Michelin and you think of the guy, not the tires!”) On the cover of a Macy’s press packet, there’s an illustration by KAWS that features sketches of some of the balloons in the parade. There’s Papa Smurf with a big smile, a coy Hello Kitty, the Aflac duck riding a sled and an elf from Santa’s workshop. Injecting a black and white buffer into all that enthusiastic color is Companion, its face, as usual, obscured behind its hands. You get the sense that the hidden expression couldn’t possibly be a smile.

MR. DONNELLY GREW UP in Jersey City, where he started tagging walls with the word KAWS. The name stuck.

“When you think about graf, you see the history of names that came before you, and you try to get a name that stays away from anything,” he said. “And you also try to choose letters—I mean, you’re gonna be working with these four letters again and again and again, and you want to have things that work together. I just liked the way the combination of the letters K-A-W-S interacted with each other. I keep it now because it’s kind of like working in third person. People see that and they can’t assign anything to it the way they would with ‘Brian Donnelly.’ So you have a name, but you’re really just faced with the work. You’re not thinking, ‘Oh this guy’s Irish.’ Or this guy’s anything. There’s nothing you can put to it.”

He moved to New York’s Lower East Side around the time Christy Turlington’s underwear modeling campaign for Calvin Klein blanketed whole sides of buildings with billboards and covered decades-old graffiti. So KAWS took it upon himself to restore things by, for instance, painting a cartoonish skull and bones into a big Kate Moss ad. He was working a day job in animation at a company called Jumbo Pictures, painting backgrounds and illustrations for children’s books. Eventually he gave up graffiti—he was losing interest, but also the work was getting stolen after just a few days of being on display. He started experimenting with sculpture, quit his day job and devoted himself full-time to making art. (He had to “take a pay cut for a little while,” he said.)

Making a float for the Macy’s parade puts KAWS in good company. The event’s so-called Blue Sky Gallery series has included Jeff Koons (a giant shiny rabbit) and Takashi Murakami, who famously danced around on his float in a plush flower costume. In a way, a giant balloon floating down Avenue of the Americas could be considered the most literal form of street art. And the gloomy Companion taking his place alongside Pikachu and Sonic the Hedgehog on national television is a disruption on a larger scale than defacing a Calvin Klein ad. KAWS has come a long way from Jersey City, but he’s also getting back to his roots.

“My career has not been a quick shift,” he said. “It’s been a little while. It’s been over 20 years. I feel like I’m still young.” 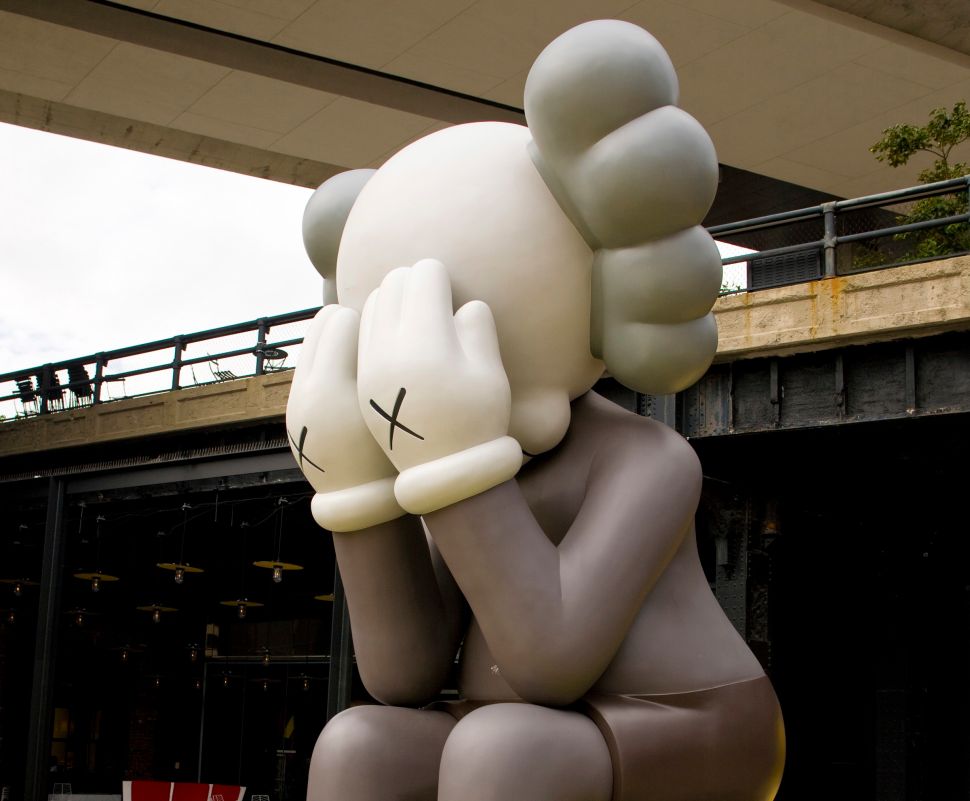