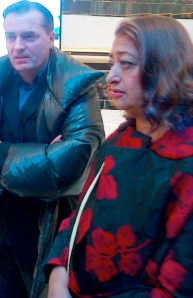 Kenny Schachter is a London-based art dealer, curator and writer.  His writing has appeared in books on architect Zaha Hadid, and artists Vito Acconci and Paul Thek. He is also a contributor to the British edition of GQ and Swiss money manager Marc Faber’s Gloom Boom & Doom Report.

I landed in Beijing last week—on my first visit to China, for the opening of Soho Galaxy, a new office complex by Zaha Hadid—and hit the ground running. Within minutes I met up with a young TV executive I’d gotten to know four years ago, at the opening ceremony of the Summer Olympics. (It was over eight hours long, so there was plenty of time to make acquaintances, again thanks to Zaha, who designed the sublime swimming pavilion.) The agenda for the day was lunch, followed by artist and museum visits and a tour of Beijing’s artist and gallery district, 798.

The fact that the restaurant where we had lunch, South Silk Road, is one of eight owned by artist Fang Lijun says a lot about Chinese artists’ passion for food and for sharing meals with friends, but also, of course, speaks to the massive financial success they’ve had. Running on little sleep, I was ill prepared for the 19-course feast, with its cacophony of dishes washed down by a viscous, milky white rice wine, which was thankfully low in alcoholic content. My induction into Beijing life had begun.

With my drooping eyelids, I could barely take in the sprawling banner in front of the Today Museum, China’s first privately owned art institution, announcing the retrospective inside of artist Wang Guangyi. On it the longhaired, middle-aged artist is shown gripping a Havana cigar the size of a baseball bat. Apparently, things like stogie smoking, gambling, womanizing and drinking were hallmarks of the rapid rise to prominence of China’s solely male art market elite.

Wang’s artistic production is incredibly diverse, but you might not know it, looking at him from the West. You’ve probably seen his paintings—the easily digestible ones that became the darlings of collector and tastemaker Charles Saatchi, not to mention the auction houses.  They feature Cultural Revolution-type graphics decrying our brand infatuations: “Pepsi No! Coke No! Porsche No!” (To which I say: Porsche, maybe?)

Then it was on to the 798 art district. Once known as a hotbed of creativity, it has become so Disney-fied as to bear little resemblance to its former self. It’s strewn with countless galleries, quasi-museums, restaurants and shops—one can only wonder how the sheer volume of artworks on offer can be absorbed even by the (over) populated standards of China, not to mention the constant flood of tourists.

The vastness of the 798 enterprise is symbolic of the magnitude at which China does BIG. As gentrification encroached on the factory spaces of 798, artists and galleries moved out to even more expansive digs on the outskirts of the city. With thousands of galleries on offer in theme park after theme park—because that really is what these art complexes look like—where can all the stuff possibly go? When it comes to supersized, China has no peer.

The following day, after a seemingly interminable time in Beijing’s indescribable traffic—suffice to say they’ve created the world’s largest parking lot—I arrived for a lunch meeting with a prominent provincial minister. As China is building museums with the casualness and frequency with which you might scratch an itch, I was able to set up this meeting fairly easily. I was told he was in charge of “Publicity” for the region but his card stated “Propaganda,” a more forthright description of what public relations is here. He also happens to be a renowned poet with a view to obtaining an architectural commission for Zaha. With the present Communist Party leader said to be worth in excess of $4 billion, politicians are on at least an equal footing with the world’s leading entrepreneurs, actors and rock stars, and not to be taken lightly.

Zaha didn’t arrive for another hour—an eye infection that morning had her waiting for the hotel doctor—and in her absence the patient (a quality no doubt cultivated by the local traffic conditions) minister introduced his book of poems and asked, through his interpreter, who was my favorite contemporary poet. Being non-versed in verse, I struggled, and when after a while I wasn’t able to answer him, the amused minister decided I should recite some of his favorite translations from his book. With sweat freely flowing from my pores, the congested roads of Beijing began to look good by comparison.

The minister explained the penchant in his province for body painting that, in the intricacy of its patterns, emulates embroidered silk fabrics, and told me about the secret existence of only two extant torso-scaled preserved human tattooed skins, one of which was in a private collection that he offered to share with us, should we take him up on his offer for a visit. The thought of it was a bit much to stomach on top of the gooey, glutinous dishes endlessly circling around the table’s Lazy Susan.

A little later, an acute MSG episode in my hotel room, which introduced me in unattractive ways to a fully electronic, heated toilet, inspired me to write my own poem: “Ok I sometimes sit when I pee / Which I don’t admit with glee / But this heated gizmo / That opens when you come near / Flushes when you disappear / And if you don’t beat / A hasty retreat / Is sure to singe your rear.” And then I was summoned to a luncheon with a college pal I hadn’t seen for more than 25 years, a daunting and potentially unpleasant undertaking that came about as a result of Facebook. But the thought of a lone sightseeing expedition was even less appealing. We were accompanied by a U.K. and Chinese print journalist who was insightful on some of the finer points of Asian existence. Many Chinese have assumed English names for work purposes. Apparently, they are given the option of choosing these names, and corporate entities provide thick, alphabetically arranged books to employees who are loath to wade all the way through them, hence an abundance of women named Aida. Other names my friend has encountered include Lucifer, Panic and Refrigerator. Personally, I’d go by Vino, something nice and exotic sounding, and close to the heart. 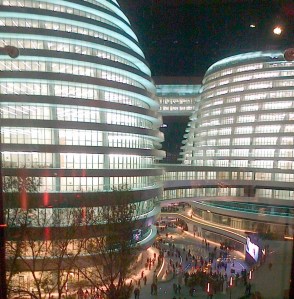 And then, on the third and final day of my whirlwind trip, it was finally time for the grand opening of Soho Galaxy, Zaha’s new three-building office complex, which looks like what would happen if the Guggenheim gave birth to gigantic Siamese triplets. Buildings by foreign architects haven’t all been well received in this city, despite their fame abroad. The CCTV headquarters designed by Rem Koolhaas, which I am not alone in seeing as one of the world’s truly spectacular works of architecture, has been almost universally derided in China as having crummy feng shui, resembling a crouching woman (from which angle I never quite figured), a vagina (though I’ve yet to see a rectangular one) and being evidence of China embracing dictates of Western culture at the expense of local talent. On top of all that, some consider it cursed by a fire that occurred during construction.