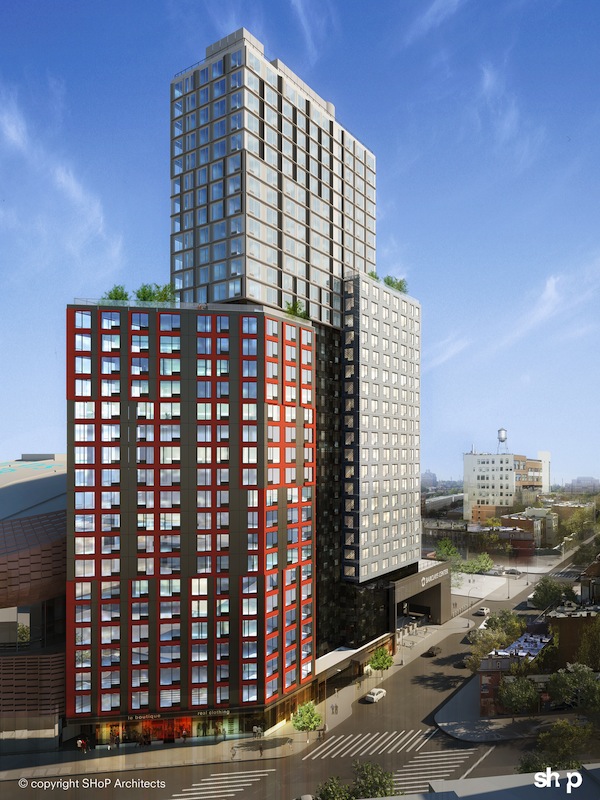 At 32 stories, it will be the world's tallest prefab building, topping a 20-story hotel in England. 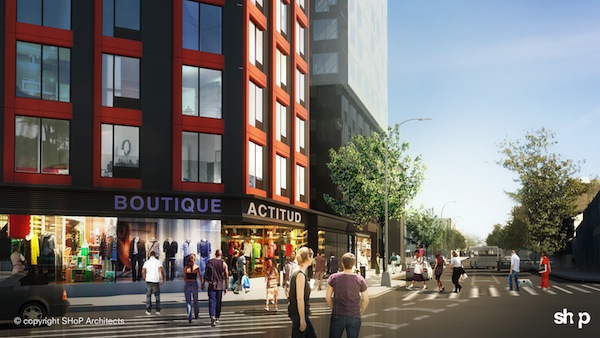 Designed by SHoP Architects and Skanska engineers, the tower is located at the corner of Flatbush Avenue and Dean Street. 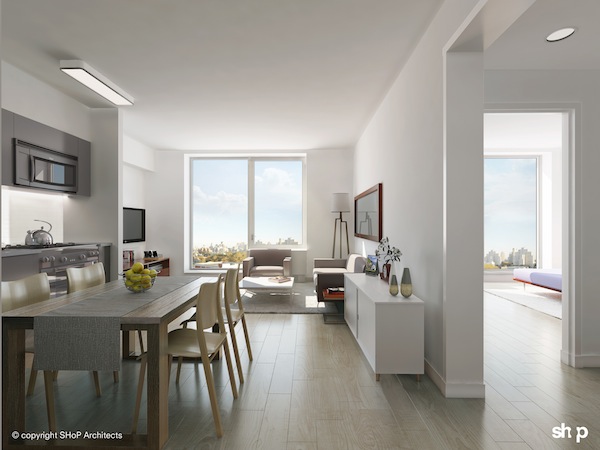 There are 363 apartments made out of 930 "mods," prefab units that snap together to create each apartment, with holes connecting the mod rooms. 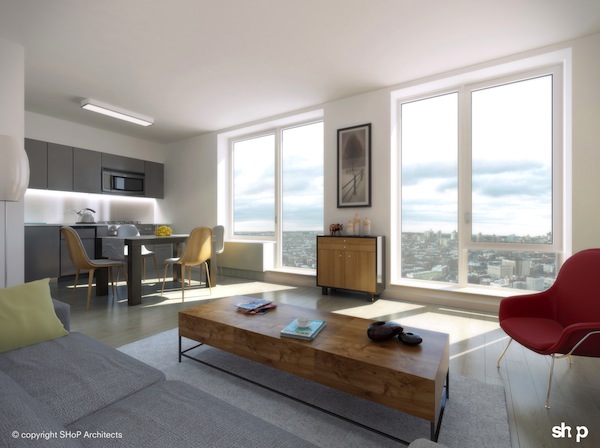 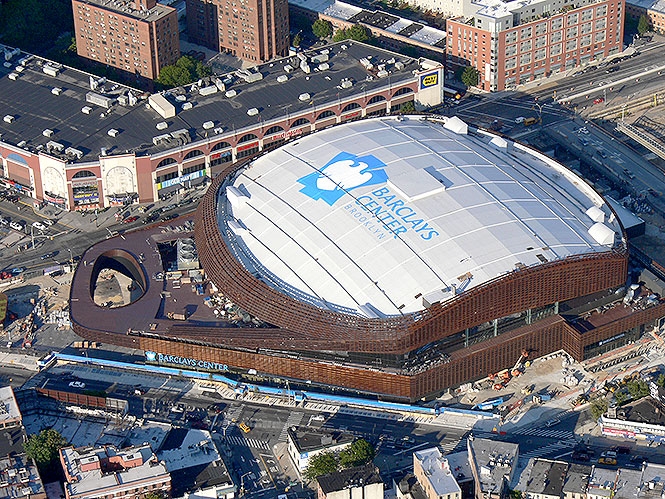 The tower will rise on the small site just west of the arena's southern entrance, which part of the tower will be built over, integrating the two buildings into a cohesive whole. 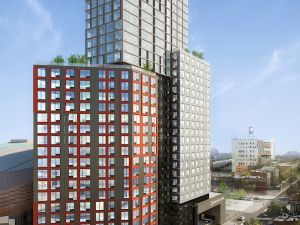 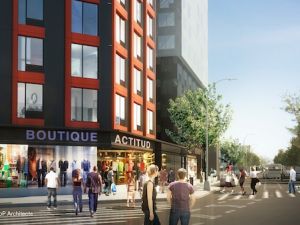 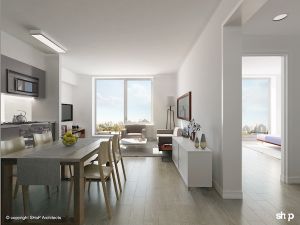 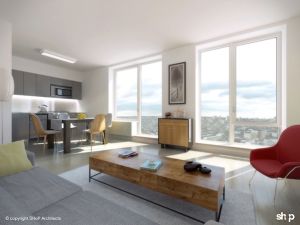 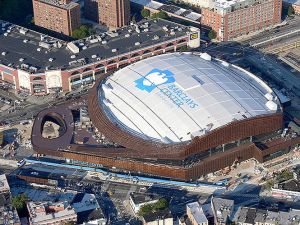 Bruce Ratner did not win out with the tax man this week, but he has secured an even bigger deal with another New York City institution that will be a linchpin for his Atlantic Yards project. Today, Forest City Ratner announced it is going forward with its long-planned intentions to build a modular apartment tower as part of the 22-acre arena-anchored mega-development. The project is made possible in large part through an agreement with the city’s labor unions to allow the 32-story prefab apartment building to proceed.

Modular construction has long been a dream of architects, for its efficiency and control, and now it could be a boon for New York City developers as well, since prefab methods can save 20 to 30 percent from traditional design methods. The only issue is for construction workers. Because the projects are built in factories, even when using union labor, the jobs tend to be less skilled and thus lower paying. Many labor unions had bridled at this, especially since Mr. Ratner had made extensive promises about the well-paying jobs Atlantic Yards would provide. But today the Building and Construction Trades Council announced its support for the development, saying that the prefab builders will get their own division within the labor group.

Gary LaBarbera, president of the council, suggested that without this agreement, nothing would have been built (never mind promises by Mr. Ratner with the state to start building at some point), and so this deal was acceptable.

“Today, we move forward with an innovative approach to development that will allow us to realize the vision of the Atlantic Yards project and create traditional construction jobs that may otherwise have been at risk,” Mr. LaBarbera said in a statement. “And as we bring training, skill, quality and safety to modular construction through a strong labor-management partnership on this project, we see the potential to have this approach improve our competitiveness elsewhere in the local market and expand into an export industry to create even more sustainable union jobs that pay good wages and benefits.”

Indeed, Mr. Ratner and others have touted modular construction’s ability to be a boon for the entire development industry, particularly on the affordable housing front. This is an area of development the unions have not typically occupied—though they are also increasingly trying to horn their way in in other ways—and if it can corner the prefab market, many projects employing it in the future would have to deal with the unions. Even with higher wage rates, the cheaper costs—from controlled environments of the factory floor and streamlined construction processes, plus cheaper union jobs—could entice many developers across the city.

Or even across the world. B2, as the apartment tower is known, would lap many times the current record holder for prefabricated construction, a 20-story hotel in England. And the involvement of SHoP is meant to suggest that prefab can be sleek and design-y as well. “With modular, we are also transforming how housing is built in New York City and, potentially, around the world,” Mr. Ratner said in a statement. “And we are doing it, as we do with all of our construction, in partnership with union labor, the best labor, in the best City in the world.”

Part of the reason for building modular is because the return on the first tower is limited, following a commitment by Forest City Ratner to make the building 50 percent affordable. Of the 363 unit in the building, half will be affordable, though there have been complaints of just how affordable they will actually be.

Working with SHoP and engineers at Skanska, Forest City Ratner developed a system that will allow some 930 modular units, known as mods, to be assembled at a factory in the Brooklyn Navy Yards. They will be trucked onto the site, at the corner of Flatbush Avenue and Dean Street, hoisted into place and connected. There are more than 30 different mods that can be combined to create apartments ranging in size from a studio to a three bedroom. The project will also be green, seeking a LEED Silver rating.

“Two years ago, due to the financial environment and other issues, we undertook intensive research and development to explore the feasibility of modular and to infuse technologically modern means of construction in our design and construction methods,” said MaryAnne Gilmartin, Ratner executive vice-president. “We believe we’ve achieved a significant break through that will allow us to create world-class design and keep our commitment to union labor and deliver a significant amount of affordable housing.”

There was no mention of whether or not there is a special tax break for building modular housing.