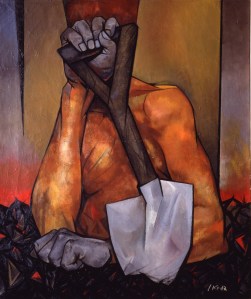 There were other high jinks. Hi Red Center designed morbidly luxe nuclear fallout shelters for Yoko Ono and other performance attendees. In 1964, the group’s Hi Red Center’s Great Panorama Exhibition consisted of the closure of their gallery for the entire exhibition period. This work is documented in black-and-white photographs, and Maciunas’s poster of the group’s antics dot the map of Tokyo with over two dozen activities. The group’s political and satirical tricks seem relevant to much art being made today; New York could use a show devoted solely to its radical antics.

The show’s final room, which includes both photography and graphic design, has posters promoting Tatsumi Hijikata’s early Butoh dances, as well as a wall of photos including Shomei Tomatsu’s famous image of a Nagasaki woman scarred by the atomic bomb. All of this material feeds into the show’s performance series, which will include a newly commissioned “history musical” by contemporary artist Ei Arakawa (Feb. 5 to 7), and a film series curated by noted Japanese film scholar Go Hirasawa, which serves as a retrospective of the Art Theater Guild (1960-84), an avant-garde Japanese film company. American audiences may find this facet of the exhibition revelatory: most of the films in the series are extremely rare. Look out in particular for films by Koji Wakamatsu, appearances by Nobuhiko Obayashi and Susumu Hani, and be sure to be there on January 28, when Donald Richie and Shuji Terayama’s films will be screened.

“Tokyo 1955-1970” is worth seeing if you are interested in Japanese history and culture, or postwar art in general—or if you are just interested in how a devastated city remade itself into a global economic capital. If the show has a flaw, it is that the best work from this period is not the sculpture and painting on view, but an ephemeral attitude of resistance and collective activity that can only ever be footnoted by physical objects.