Out of the hollows and caverns of its own intraparty passions, the Bergen County GOP trails a blood spoor into 2013 that BCRO Chairman Bob Yudin says will be more than staunched with Gov. Chris Christie at the top of the ticket.

“He is going to win the state, and his win might even approach that of Tom Kean’s win in 1985,” said Yudin.

He added, “The governor is going to carry Bergen County.”

Those two nouns – “Tom Kean” – are word cloud heaven for a GOP convinced Christie can get into 71-24% territory next year, the margin by which Kean drubbed Peter Shapiro.

“He is going to win overwhelmingly,” Yudin declared of Christie, who on Monday announced his intent to seek a second term.

On his way to trying to secure a county he lost by 6,000 votes in 2009, Christie’s boots will touch a Bergen County turf badly mauled by a GOP war with itself that blew up most publicly during the chairman’s battle that resulted in Yudin securing another term.

“Had we had better unity, a better plan, a better organization and a better leader, we would have had a better chance to win,” said Hermansen, who lost by approximately 40,000 votes, sopped into a confluence of Barack Obama and Hurricane Sandy misery.

Hermansen said he asked for $25,000 he never received, found a locked BCRO headquarters on the Sunday before Election Day, awaited mailers that never hit houses until after the election, and looked on in horror as 3,000 Democratic Party GOTV bodies descended on Hackensack and met no countervailing GOP force.

“I don’t think I would have won anyhow,” Hermansen acknowledged, referring to the dynamics caused by the presidential election, but he felt he had a tomahawk in his back from the start.

“Everyone knew this was going to be a difficult election for us, but when this whole thing started there was no sense of what we were going to do,” said the incumbent GOP freeholder and longtime Yudin rival. “I felt very good about the Romney message, which I thought would sell in Bergen County. Many people I talked to in Bergen were fed up with Obama. I’m shocked Romney lost here by 11 points.”

Yudin simply didn’t do enough to put the team in the best position to win, Hermansen charged.

“What I do think happened is he did nothing for the campaign,” the freeholder said. “The money raised was raised by the governor’s people and didn’t get spent except on mailers sent out after the fact. Over 25,000 people who were supposed to get mailers got them after the election.”

The chairman said his first authorized mailing hit a quarter of a million households.

“The second was a six-hour decision,” he said. “We were assured by postal authorities if we mailed the mailers they would get out in time. I had to make a decision. Most mailers got delivered in time. Some of the towns did not receive them.

“Hermansen blames everyone for losing but himself,” Hermansen added. “First of all, there was an Obama tsunami.”

But, the chairman maintains, he believes if the GOP ticket had a shot at winning the election, the candidates needed to have picked up on the issue of merging the county police force with local law enforcement authorities.

“Rob refused to allow the issue to be used,” Yudin said. “I wanted both freeholder candidates to run on giving taxpayers relief – a $15-$20 million savings by backing the merger and promising direct property tax relief. Peg Watkins wanted to do that. Hermansen stopped it.”

As for Hermansen’s complaint that the BCRO didn’t have more money to spend, Yudin fingered a culprit.

“We lost tens of thousands of dollars because of Hermansen’s pay to play law,” Yudin said. “Hermansen causes a tremendous reduction in contributions and then complains that he doesn’t have enough money.”

Chances are the chairman and freeholder haven’t fought their last political brawl.

Charged with writing bad checks, embattled Assemblyman Robert Shroeder (D-39) appears to be limping toward the finish line of this current term, and sources are buzzing about Hermansen saddling up again next year in a run for that Assembly seat and the chance to run on the ticket with Christie.

Better to be on a Christie tsunami than get buried by one named Obama, or so runs the political logic.

“I’m a freeholder until Jan. 1,” he said. “At this point my family and I have decided to take some time. Some of the things at the BCRO left a bad taste in my mouth. I probably will wait and make a decision. The party really needs to focus on elections.”

For Yudin’s part, he is focused, he says: on getting Christie re-elected. “He is fantastic,” the Republican chairman said of the governor. 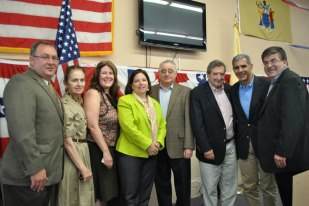