A limited-run, Christmastime-only Broadway show is usually as entertaining as the Channel 11 Yule Log. (See, if you must: Elf.) The latest is another dreaded film-to-stage transfer. And, worst of all, it was conceived as a national touring production, only brought to New York after being schlepped through Detroit, Tampa, Fla., and Hershey, Pa.

But as it turns out, A Christmas Story, The Musical, which opened Monday night at the Lunt-Fontanne Theatre, is a fantastically good time, the resolutely non-sentimental 1983 holiday movie transformed into a resolutely non-cheesy two and a half hours of song, dance and shtick. It is—and I’m as surprised by this as you are—the most fun I’ve had at a Broadway musical all year.

You remember the movie: snowy Indiana in the prewar 1940s, bespectacled kid Ralphie dreaming of a BB gun for Christmas, and a Wonder Years-style adult narrator recounting the story. “You’ll shoot your eye out,” “triple-dog dares,” the immovable snowsuit, the leg lamp and Chinese food on Christmas night. (Thanks, TBS marathons.) It’s a wry, somewhat downbeat, nostalgic and ultimately quietly uplifting story, stocked with those now-classic bits.

On stage, Joseph Robinette’s script retains that offbeat tone and, admirably, lands those bits in a way that respects but doesn’t milk them. The score, by the 20-something team of Benj Pasek and Justin Paul, is pastichey and peppy. The child actors—all the actors, but especially the kids—are hardworking and hilarious. And the staging, by John Rando, with Warren Carlyle choreographing, includes two delirious, show-stopping production numbers: a kick-line featuring those leg lamps, and a tap dance capped off by the bravura stylings of Luke Spring, a 9-year-old Gene Kelly. Johnny Rabe, 12, competently and confidently leads the show as Ralphie.

Sure, it’s not perfect. Dan Lauria, as the narrator telling the story (no movie-style anonymous narrator in this live show), is left with sadly little to do. Messrs. Pasek and Paul’s lyrics are less impressive than their music. The prologue and epilogue created for Mr. Lauria’s narrator add unnecessary padding. The uncomfortably racist “Fa-Ra-Ra-Ra” scene in the Chinese restaurant probably could have gone.

But it’s old-fashioned showbiz, and it works. After a grim year for Broadway musicals, that’s gift enough for me.

In real life, of course, there are no miracles.

So we are made painfully aware in Nathan Englander’s The Twenty-Seventh Man, which opened at the Public Theater on Sunday night. It is equally fantastic, but also harrowing and heartbreaking.

In 1952, after a secret trial, 13 Soviet Jews were executed in a Moscow prison. All had been prominent in the wartime Jewish Anti-Fascist Committee, a group created on Stalin’s orders to fight a propaganda war against Nazi Germany. Among the murdered were five leading Yiddish poets and novelists; others were actors, editors, translators, doctors. Details about the so-called “Night of the Murdered Poets” were kept largely secret until after the fall of the Soviet Union.

Mr. Englander included the story “The Twenty-Seventh Man” in his debut collection, For the Relief of Unbearable Urges, published in 1999. He first wrote it in the early 1990s, before those details were known. In it, he created a fictitious world based on that true one, a crucible of a single prison cell that contains three famous Yiddish writers—Zunser (Ron Rifkin), a master novelist; Bretzky (Daniel Oreskes), a poet and notorious libertine; Korinsky (Chip Zien), a poet and notorious toady, a man who’d used his skills to flatter the regime—and, finally, the 27th prisoner, Pinchas Pelovitz (Noah Robbins), a child who writes but has never published, a brilliant boy placed suddenly among his idols, likely, and sadly, by clerical error.

The story, and Mr. Englander’s stage adaptation of it, uses these four men, with occasional interlocutions from their jailers, to explore a range of themes: the death of a vibrant literary culture, the compromises an artist makes to survive in a totalitarian world, what makes someone an honest writer or an honorable man. In Mr. Englander’s telling, and with director Barry Edelstein’s forthright staging, the result is brisk, crisp, efficient and deeply moving.

In the play’s final moment, Pinchas recites for his accomplished cellmates a story he has composed while in jail. They approve of it, and he is validated, and happy. Then they are all shot. It is horrifying.

But the stories, through thousands of years and in Jews like Mr. Englander, live on.

August Wilson’s The Piano Lesson, the fourth of his acclaimed Century Cycle plays about the 20th-century African-American experience and one of two to win the Pulitzer Prize, opened Sunday in a one-off revival at the Signature Center that offers a far more hopeful view of the future.

But it’s not clear for most of the play that we’ll end up there. It’s 1936 in Pittsburgh’s Hill District, and Berniece (Roslyn Ruff), a hardworking and widowed domestic, is raising her young daughter, Maretha (Alexis Holt), and living with her uncle, Doaker (James A. Williams). These are good, decent people, but they also seem incapable of escaping their pasts—Doaker reminiscing about the old times with a visiting cousin, Wining Boy (a flashily scene-stealing Chuck Cooper), and Berniece unwilling to consider a future with Avery (Eric Lenox Abrams), a pastor who wants to marry her.

The future arrives in the loud, scheming person of Boy Willie (Brandon J. Dirden), Berniece’s brother, up from Mississippi. A sharecropper recently out of prison, he has a plan to buy some of the land on which their family had been slaves. He just needs money to do it—which means selling the intricately carved piano sitting in the Pittsburgh house. The piano was carved by their grandfather, as a slave, to remind him of his wife and son, who were sold away. It is the repository of the family history.

This is a rollicking, visceral production, staged by the actor Ruben Santiago-Hudson. It leaves you wondering whom to root for: Berniece and Doaker’s past is honest and worthy but over; Boy Willie’s future is progress but he’s a buffoon. Mr. Wilson’s accomplishment is how he finally bridges that gap, providing a way for the family to move forward by embracing, not rejecting, its past. That’s quintessentially American, even in the Hill District. 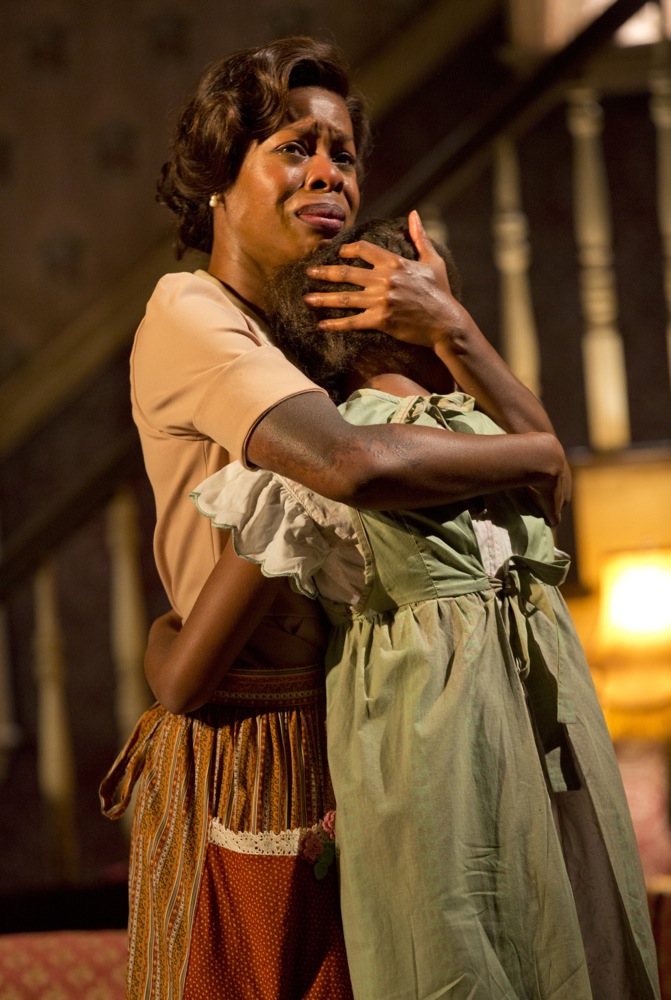