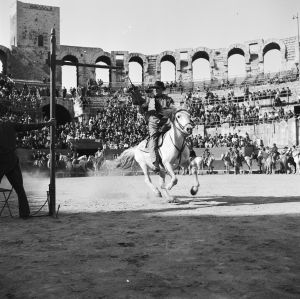 A rodeo competitor at the Roman amphitheater in Arles, France, in 1955. (Three Lions/Getty Images)

Your daily dose of Jonathan Jones, writing here about the exhibition “Light from the Middle East” at London’s Victoria & Albert Museum. [The Guardian]

Thomas Schütte builds a “Holiday Home for Terrorists” in Austria. [The Art Newspaper]

South African police find $2 million in stolen paintings at a cemetery. [The Independent]

Sir John Eliot Gardiner talks about the relationship between art and music. [WSJ]