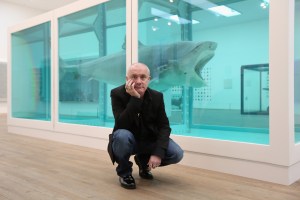 Not every work by Damien Hirst has increased in value since 2009. Do with that information what you will. [The Daily Mail]

A new Los Angeles city ordinance grants police the power to decide what is appropriate to sell at Venice Beach. [WSJ]

When will Canada be a major player in the international art market, eh? [The Globe and Mail]

Franco Darío Vico won the 2012 Faena Prize, which includes a show at the Faena Arts Center in Buenos Aires. [Artforum]

“In Art Prints, Clues to Beetles in Europe” [NYT]

Leo Villareal—of Buckyball fame—has a new installation at Cornell that is a tribute to Carl Sagan. [io9]

The latest work by Gustav Metzger has a robot do all the work. [The Guardian]

Two Banksy murals, once on display in West Bank, will travel to Miami as part of the Context art fair. [The Art Newspaper]