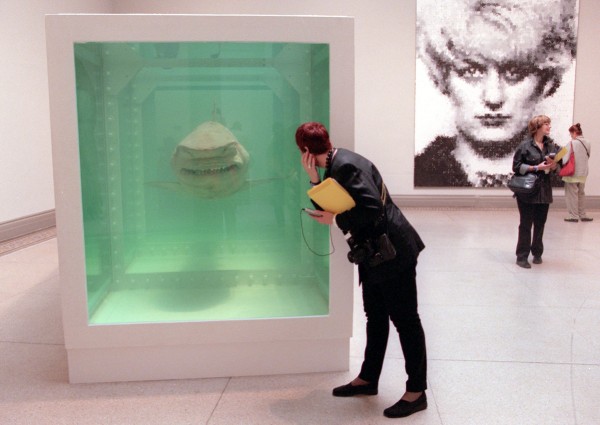 Damien Hirst’s ‘The Physical Impossibility of Death in the Mind of Someone Living.’ (AFP Photo/Doug Kanter)

Unlike many of the city’s galleries, New York’s museums made it out of Hurricane Sandy relatively unscathed. But even as the storm raged, they were quietly facing another battle—
in court.

Blockbuster exhibitions like the Guggenheim’s “Picasso Black and White,” the Whitney’s “Yayoi Kusama” and the Met’s “The Steins Collect” could be a thing of the past if a decision in a lower-court case involving textbook sales is upheld by the Supreme Court. On Oct. 29, the court, which was open despite the hurricane, heard oral arguments in Kirtsaeng v. John Wiley & Sons, a legal battle over whether copyrighted books produced abroad can be imported to the U.S. and resold. Though the case involves textbooks, it also implicates a section of the copyright law that applies to Picassos and Brancusis. The case started out in 2008 in federal district court in New York. Supap Kirtsaeng, a foreign exchange student at Cornell, found that his textbooks could be purchased more cheaply in his native Thailand, so he asked friends to buy the books there and ship them to New York. He then started selling them on eBay and, when he had racked up $37,000 from those sales, the textbooks’ publishers, John Wiley & Sons, filed suit. Mr. Kirtsaeng was found guilty of willful infringement and was asked to pay $75,000 for each of the eight Wiley textbooks he sold copies of, for a total of $600,000. Mr. Kirtsaeng appealed that decision, and in August 2011, the United States Court of Appeals for the Second Circuit found him guilty as well. In the meantime, in July 2012, the Association of Art Museum Directors (AAMD) and a group of 28 American museums including the Solomon R. Guggenheim Foundation, The J. Paul Getty Trust, the Museum of Modern Art and the Whitney filed a brief as “friends of the court,” in support of Mr. Kirtsaeng.

Mr. Kirtsaeng’s attorneys invoked the “first sale doctrine,” which can be found in section 109(a) of the Copyright Act, which limits certain rights of the copyright owner. The doctrine enables an owner of a copy to buy, sell, loan or borrow it without getting the permission of the copyright owner. (A “copy” under the Copyright Act doesn’t mean a pirated work or a work that is not original; it means the material object in which the copyrighted work is first fixed—so a copy could be an original work like a Damien Hirst shark sculpture, or it could refer to any of the millions of paperbacks of Fifty Shades of Grey published by Vintage.) But John Wiley & Sons, the publisher, maintains that the doctrine does not apply to works made abroad.

“Art museums have long depended on Section 109 of the Copyright Act,” the brief states, “to develop and display their permanent collections and to assemble and present special exhibitions of art … without having to obtain the copyright owner’s permission.” Displaying, acquiring, borrowing and loaning art are at the core of what museums do.

According to the decision by the Second Circuit, “lawfully made under this title” means lawfully made in the United States. If the decision were allowed to stand, the museums argue, museums may lose their right to display paintings made abroad, like Picasso’s Les Demoiselles d’Avignon, Edvard Munch’s The Scream and even those paintings by American artist Cy Twombly that were made in his studio in Gaeta, Italy.

“Museums want the certainty that has been there for generations,” Stefan Mentzer, the attorney representing the museums on their brief, told The Observer. “There could be some serious unintended consequences if the lower court’s decision were to be upheld.”

ROBERT CLARIDA, A PARTNER at Reitler Kailas & Rosenblatt LLC and the author of Copyright Law Deskbook, said that while none of the parties in the suit intended for this to happen, it’s a very possible consequence. “No one pursuing this 109(a) resale claim is thinking about ‘Oh, well, you know there’s also identical language in another part of the statute, and if you read it the same way, it’s going to have this crazy result.’”

If Wiley gets its way in the Kirtsaeng case, every museum that hangs a foreign-made work of art on its walls would be a potential infringer. Copyright owners could demand royalty payments—which museums would have to manage on a case-by-case basis—or even insist on control over curatorial decisions.

“Let’s say a show was being put together that had some ideological content that the artist didn’t like or the artist’s estate didn’t like,” said Mr. Clarida, discussing some of the more extreme possibilities he could imagine. “They might then try to say, ‘You can’t put my work in your show because it makes me look bad or makes me look like I’m affiliated with some sort of ideology that I’m not fond of, and I want you to take that piece off the wall.’”

The results could be disastrous for the museumgoing public. According to the museums’ brief, in 2008, “an estimated 51.1 million visitors, or 23 percent of American adults, attended an art museum or gallery in the U.S.”

In any event, the museum issue may have to be hashed out as the case proceeds. According to someone close to Wiley who asked to remain anonymous, the publishers don’t think the court will get to it. “This isn’t a case about museums and what museums can display or not display,” he said. “So it would be an issue for a court in a later case to interpret the museum provision.”

The museums could always resort to invoking fair-use defenses, for educational use or public edification.