Going through post Election Day trash just outside Drumthwacket, we came across some interesting legal memos, receipts and old notes.

Amongst the batch (which our crew is still sifting through —the Secretary of State has given us until Tuesday, November 13th at 8pm to get this all sorted out),  We were able to get a hold of a memo written by Governor’s spokesperson Michael Drewniak on the rejected ways that the Christie Administration had considered for gas rationing. This was well before he had committed the odd/even dichotomy.
Here are the top rejected ways to ration gas in New Jersey:
-Giants fans versus Eagles fans-Jon Bon Jovi versus Bruce Springsteen-South Jersey versus North Jersey(Central Jersey you’re screwed)
-Those on the PolitickerNJ Power List and those whose names appear regularly on Nick Accocella’s Politifax.
-Those who like Philly cheesesteak versus those who like New York hotdogs
-Those drivers who have given the  finger on the New Jersey Turnpike and those have received the finger on the New Jersey Turnpike.
-Those who want gas and those who don’t want gas.
-Republicans odd days, Democrats even days. (On the Republican days, they would be self serving.).
-Snooki fans one day, The Situation fans the next day.
-Steve Adubato, Jr.  any day he wants.
(Oops, just got another directive from the Secretary of State’s Office, that Vote by Thought ballots have been extended through December 1, 2013. I think she should give that more thought.) 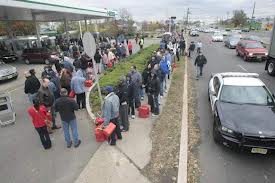