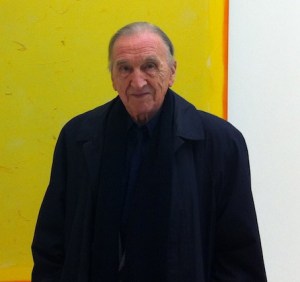 The Art Newspaper reports that the Scottish painter and sculptor William Turnbull passed away yesterday. He was 90.

In the 1950s he was a member of the Independent Group, the band of artists and writers that sprang from the Institute of Contemporary Arts (ICA) in London and is credited with having broad influence on the Pop Art movement, particularly in Great Britain. An RAF pilot in World War II, he discovered sculpture at the Slade School.

The Art Newspaper also has a statement from Tate Modern Director Nicholas Serota.

“William Turnbull was an exceptional artist, unusually gifted both as a painter and a sculptor… Initially, his distinctive sculpture developed in response to his stay as a young man in post-war Paris, where he met Giacometti, Brancusi and Helion amongst many others. It matured through his admiration for the simple forms of ancient and eastern cultures and his abiding search for the essence in any object. In this he came close to the purity of Barnett Newman, or to his own contemporaries such as Ellsworth Kelly. However, his sculpture and his painting always had a humanist sensibility that identified it as profoundly European.”