If you were to take an image of Aeneas fleeing Troy with his father on his shoulders as a self-reflective metaphor about 21st-century art-making, it would be tempting to read the aged Anchises as standing for the history of painting. Once favored by Venus, it’s now a burden that must be carried until it expires. To make After Troy 10, Pieter Schoolwerth begins with a reproduction of Lionello Spada’s majestic Aeneas and Anchises, circa 1615, enlarges it to the point of gaudy pixelation, and then, before printing it on canvas—a “giclée” print, more commonly known as inkjet—removes the little bundle of household gods, Aeneas’s son, his wife Creusa’s body and nearly all of both men.

What remains are Aeneas’s hand and his father’s foot; Creusa’s modest, heartbroken face; the bunched shoulder of her blouse, moved over to replace her husband’s head; a matte, chalkboard-like, bluish-black void, painted with oil, that reads as background but is actually an active erasure; and a series of simple, vivid gestures of semi-abstraction, thick bars of dancing paint, cartoon faces and hands drawn in oil pastel. Physically linked but substantially unrelated, these elements all combine into a single, precarious structure.

But Mr. Schoolwerth isn’t actually looking backward any more than Virgil was. The central figure in After Troy 1 is a vision of the future, constructed from an arm and face taken from Simon Vouet’s 1635 Aeneas and His Family Fleeing Troy, a stormy cluster of broad yellow and red strokes, a blue and white pastel outline, and a red hand raised in benediction. At some point, representational painting will integrate all the new modes of representation now available, but what it will look like once it has is impossible to say. So Mr. Schoolwerth resorts to florid hallucination: father and son embracing become a single whirlwind, halved as well as doubled by their embrace, and the pixelated beard of the father is impossible to look upon.

Swedish painter Viktor Kopp’s rectangles are archaeologically laborious excavations of the directionality of vision, the tricks and troubles of perspective, and the small-scale, textural possibilities of oil paint. They are also—as if art history had stopped with Surrealism, or if the Second Commandment didn’t prohibit but rather required the use of graven images—invariably representational. They undermine the self-importance of abstraction and mock the pretense of figuration simultaneously with lush brown squares of edible-looking chocolate (its paint thickened with wax and highlighted with extra oil), empty windows and old-fashioned wooden doors.

Mr. Kopp’s “Four Corners” show at Bureau is comprised of tall and narrow canvases covered with four different kinds of thick white crosshatching. Into each of these four white rectangles, from one of its four corners, protrudes yet another rectangle, this one tilted in perspective like an opening door. In Grey Corner 1, for example, it’s an upper right corner poking into the painting’s lower left. Comprised of bluish-gray, brown and more plastery white, built up into clumps of shiny opacity or thinned to a translucent wash, carefully daubed or manically scribbled, this explosion of effects is made into a simple whole only by the two straight pencil lines that make edges.

If the white background is a gallery wall, is the gray corner a painting or a window? Or is the whole canvas a kind of trick mirror that convinces two people, the painter and the viewer, that they are really looking at each other when they stare into the same opacity? The self-consciousness here is so total, the alienation of the corners’ insides from their borders so severe, that it actually flips over into a relaxed self-confidence, leaving all of the rectangles holding nothing but paint.

Beginning at the upper left-hand corner of Mr. Callegari’s Derby Day, marked out roughly in white and then more narrowly, on top of the white, in alternating sections of black and green, a single line tracks the canvas’s edges and meanders across its center, branching at apparently fateful points of decision but always returning to its clearly narrative progress, and subtly tracing out a grinning face with long nose and sunglasses, before exiting the canvas again at the bottom right. The strokes of his brush don’t follow this line—they cross over it, back and forth, as if impatient to color it in, or as if to rebel satirically against a supporting constraint that no rebellion can shake. In Fashionable Marxist, the line’s sections are lavender and red; the rectangle described is falling over to the left; and the ends of the line don’t cross the edges of the frame, although the lavender does venture once or twice out of the white. The rectangle of The Spirit World Rising, picked out in maroon and bluish black, is frantically dissolving from the inside. The high contrast of bright colors against white backgrounds against discreet gray linen makes all these forms leap out with Platonic clarity, but they don’t then resolve in the mind, so that you’re made acutely conscious of seeing clearly something you can’t actually see. 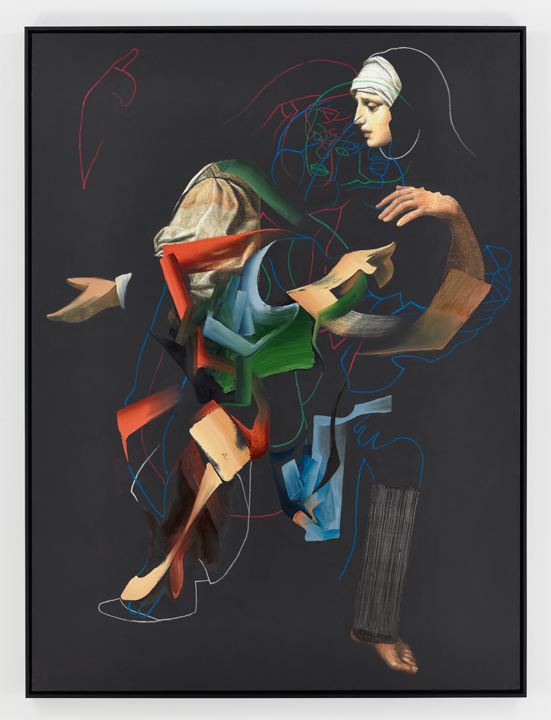