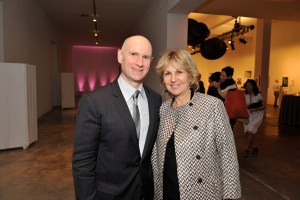 Wendy Fisher, an patron and clinical psychologist, has joined the board of the Public Art Fund. Ms. Fisher has been chair of the British Friends of the Art Museums of Israel since 2008, and this year received the Freedom of the City of London award for her philanthropic work. She’s also a sculptor, and showed work at the Olympic Village for this year’s games, according to the PAF.

Nicholas Baume, the director and chief curator of the Public Art Fund, described Ms. Fisher in a statement as “a distinguished philanthropist, astute contemporary art collector and dynamic cultural advocate based in New York and London… [who] brings a unique international perspective to the board of Public Art Fund..”

In other Public Art Fund news, its “Tatzu Nishi: Discovering Columbus” exhibition is set to close at Columbus Circle in Manhattan on Sunday, Dec. 2. Ms. Fisher helped support that project.