Quintana won’t do it.

“He has talked to me… My conscience is clear,” said the veteran councilman. “I’m not backpedaling, I don’t backpedal. Nothing against Sharpe’s son, but I made my decision. You can’t continue to play the politics of yesterday with people.”

Quintana’s affirmation of Speight locked up the council 4-4, and prevented James, the former mayor, from seating his son, John Sharpe James, in the vacant council seat.

James’s longtime foe Mayor Cory Booker then broke the tie on the governing body in favor of Speight, setting off a city hall backlash of protestors.

“We are a nation of laws,” said an unapologetic Quintana, “and the law is very clear: the mayor breaks a tie in circumstances like this.”

Sources told PolitickerNJ.com Quintana initially planned to vote in favor of James in exchange for support toward the council presidency. But, he confirmed, “I was getting mixed signals,” he said. “I didn’t see a good act of faith. I was getting the sense that people were telling me they were going to support me, then changing the play.”

In that environment, Quintana said he withdrew his support for James and instead backed Speight, who had the support of North Ward Councilman Anibal Ramos and Booker’s chief of staff, Mo Butler.

Quintana acknowledged the black/white split on the council but said it does not reflect division in the city at large.

Nonetheless, he said he is calling on clergy in the city to make a special effort during this holiday season to help government bring the city together.

“I am for unity in the community,” he said. “I pray for the City of Newark.” 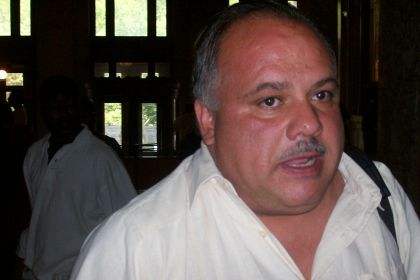