They say that a new Kickstarter campaign is created every five minutes (or something), and 7 p.m. last night was no exception. As the page for “Run Free 2013” went live, you could watch 26-year-old Kyle Scheele, the director of Ridiculo.us, makes his pitch for why you should donate to the $999 goal* of putting on a global marathon. Sorry, make that a fake global marathon.

” There’s a saying on the internet,” Mr. Scheele began. “Pics or it didn’t happen”.

“In other words, if something is real, if it actually happened, there will be pictures to back that up.

But what if something DIDN’T actually happen, but there are STILL pictures of it? Does that mean it DID happen? If something is fake, how much evidence does it take before it becomes real?

[protected-iframe id=”aea0e53b8f04f349266a08e7aae3481d-35584880-35526879″ info=”http://www.kickstarter.com/projects/ridiculous/run-free-2013/widget/video.html” width=”480″ height=”360″]
The idea behind Run Free 2013 is simple.
Step One: People give Ridiculo.us money.
Step Two: People receive packets of marathon materials (racing bib, program, safety pins, and a “running time” included in the Kickstarter donation).
Step Three: The night before the race, people blop out social media droppings about their growing excitement for the race. (Facebok, Instagram, Twitter, Linked’In, J-Date, MySpace…whatever!)
Step Four: The day of Run Free, post pictures of you and your friends participating in the marathon.
Step Five: Everybody on the Internet is like “What is this Run Free marathon everyone has been social media-ing about?”
Step Six: ???
Step Seven: Profit.

If enough willing bodies join in, Mr. Scheele’s team hypothesizes, they can “prove” that it takes a certain amount of people participating in a photo hoax to convince the rest of the world it’s for real. (Though the data seems a little murky: for instance, how will Ridiculo.us measure the “tipping point” that will formulaically prove that readers are duped after X amount off photos?)

Of course, you don’t need to fund a Kickstarter to study the trend of doctored pics going viral: Hurricane Sandy provided ample evidence for Snopes.com and Buzzfeed to compile a list of fake photos and intel; even providing some insight into why anyone would knowingly try to deceive people on social media.

(Did we mention that Ridiculo.us is owned by the Wonder Grove, a group that’s vaguely worded “adventure-capitalist” rhetoric boils down to a service that offers viral marketing? Do we have to?)

“Okay, but there’s a difference between what we’re doing and what Ryan (Holiday) did,” Mr. Scheele told The Observer by phone Saturday evening, just one day after Mayor Bloomberg had officially cancelled New York City’s real marathon. “We’re being very obvious about this not being a real race. You can read about it on the Kickstarter page. We’re promoting it as fake. We’re…”

“…talking to the media?” We suggested.

Fair enough. But that doesn’t explain why we should donate money, time, and effort for some big Internet hoax that apparently has no intention of trying to actually fool anyone?

That’s when Mr. Scheele told us a story. A story that had us dying to fund this project.

“The way we came up with this idea,” he said, “Is that I have a friend…well, I think everybody has this friend…that cannot stop talking about how there marathons. Even if they acknowledge it’s terrible and painful and not even that great for your body, they are constantly talking about it. And then they say, ‘Well, you do it so you can say that you did it.'”

“This is a way for people to say they ‘did it’ and photographic proof, without actually having to run a marathon.”

Jesus, why didn’t he just say that in first place. Forget the warmed-over social media commentary pitch. If there was something, anything, we could do to make our marathon training friends shut the hell up–not that we don’t love them and admire what they are doing but Good God it’s like listening to a two hour sales pitch on a really in-shape cult–we would reactivate our credit cards a heartbeat.

Mr. Scheele tried to continue telling us about the Incredulo.us success od their first (and only) other Kickstarter: A 50 Shades of Grey spoof book, 99 Shades Of Grey, where each page was printed in a variation of the color. The monetary goal was $600, to cover printing costs. The group raised more $10,000 for the project.

But our minds were elsewhere. Hey, did Scheele remember that op-ed from The Onion, titled “I’m Truly Sorry For This, But You’re About To Hear All About The Last Marathon I Ran”?

“It’s like this insufferable guy with an alarming amount of self-awareness, profusely apologizes for talking to you about his marathon regime. Here, we have to email it to you. It’s just like what you’re talking about, with those friends who just do not take the hint!”

Mr. Scheele said he actually didn’t have anything against people who ran marathons, and was actually offering free registry to anyone who had entered the NYC Marathon. “I had friends who spent months training, and hundreds of dollars in canceled hotels, flights, and marathon materials, so this way they can still feel like they participated.”

“Okay, but read this part,” we said, emailing him a link to our favorite quote from The Onion article.

” Believe me, if I could stop myself from talking about this, I would. But I can’t, and so I’m going to tell you all about my personal best time, and you’re going to think to yourself, “This guy’s the fucking worst.” But here’s the truly awful part: Out of politeness, you will have to pretend to be impressed by that number, even though to you it will seem completely arbitrary and hold no meaning at all.”

Right? Aren’t those people the worst?

“The Onion is actually a great example of what we were talking about,” Mr. Scheele said. “They are quite openly a satirical, fake news organization, yet they have repeatedly had their articles re-posted as fact by people who are seemingly incapable of operating a search engine (for examples, see: http://en.wikipedia.org/wiki/The_Onion#The_Onion_taken_seriously).”

Except that blurgh, The Onion‘s goal—unlike Incredulo.us’s– isn’t to conduct a “social experiment” (Scheele’s words, not ours) to create “convincing propaganda” (see above) about an event that never happened. The Michigan founders of the fake newspaper did not create their product to answer the question, “Will (people) buy into it being real, even when a quick Google search will tell them it’s not?” (The fact that people confuse The Onion‘s satirical headlines often enough to warrant its own website is an added bonus, not part of a lazy use of the scientific method. )

But no matter how much Mr. Scheele sounded like a viral marketing apologist—”We’d take corporate sponsors if they had the right attitude and believed in the project,” he said at one point–we couldn’t help being excited.

“How much money do we have to spend to give ourselves the best running time?” We asked feverishly, imagining the looks on our parent’s faces—the only people who would be fooled by the Run Free con—when we produced pictures proving that we sometimes went outdoors and exercised.

“Um, that will probably be a combination of factor,” Mr. Scheele said. “Like the amount of money donated, and who donated the earliest.”

“So if we pledge $100 the moment the site goes live, we can guarantee that we’ll “win” the marathon?”

“I mean, that’s a possibility, sure. But we’re really in this to have fun,” Mr. Scheele said. “That’s why we encourage groups to sign up with the Race Team Party Pack.” The $100 pledge “includes SIX full registrations PLUS limited-edition racing headbands.” If you add $50, everyone gets medals, too, according to the Kickstarter page.

“The more people you have ‘running,’ in the photo, the more this will look like a believable race. Points for creativity, sure. And you can take as many pictures as you like till you find the perfect shot.” The best photos will be curated on our website, Runfreerace.com.”

“Oh my god, we could all be the Ridiculously Photogenic Guy,” we murmured to ourselves, overwhelmed by the implications. “The New York Times would have to find an entirely new trend story about people who look attractive in fake marathon photos.”

“We just want this to be a big, fun community project, and maybe we can learn something from it, too” Mr. Scheele said.

“Totally,” we agreed, trying to login to our PayPal account before remembering we had forgotten the password two months ago.

Run Free might not be able to answer its own question on the amount of validity needed to “prove” a fake picture, but it could certainly help put a price point on a person’s desire to “prove” they ran a marathon. And never, ever want to talk about it again. 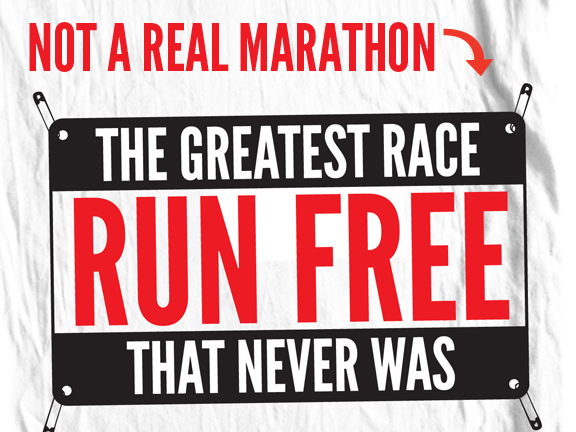