As New York continues to grapple with closed subway stations and an overcrowded shelter system following Hurricane Sandy’s late October destruction, the City is looking for a little help from its friends in Washington. Mayor Michael Bloomberg sent a letter to members of New York’s Congressional delegation today, estimating the damage caused by late October’s superstorm at $19 billion in public and private losses.

The Mayor’s request to Congress includes a breakdown of the City’s losses caused by the storm, including $5.7 billion dollars in lost gross city product and $4.5 billion spent by city agencies in the storm’s wake. Mr. Bloomberg wrote that “the city will struggle to recover in the long term unless expedited federal funding is supplied.” How much funding? Bloomberg is angling for $9.8 billion in additional money to supplement the $5.4 billion in FEMA assistance and the $3.8 billion dollars of damage that was covered by private insurance. FEMA money does not cover challenges like long-term housing solutions and shoreline restoration.

The damage in the greater New York area is expected to be much larger, with Governor Andrew Cuomo saying that he would be asking for at least $30 billion in aid several weeks ago. Governor Cuomo met with members of New York’s Congressional Delegation today in Midtown Manhattan to discuss his request for aid.

As you are well aware, Hurricane Sandy caused extensive damage to the City of New York, impairing our infrastructure and displacing tens of thousands of people. While the impact of the storm will be felt for some time and the challenges are great, I am confident that the City will rebound and emerge stronger than ever.

Throughout this period the City has worked productively with New York State, and I am hopeful that together with our partners in the federal government, we will be able to secure the necessary resources for a successful recovery. Therefore I am requesting your assistance in securing supplemental and expedited funding for the City of New York.

We estimate total public and private losses to New York City from Sandy to be $19 billion. After subtracting private insurance of $3.8 billion and FEMA reimbursement of $5.4 billion, the net cost to repair the damage caused by Hurricane Sandy will be approximately $9.8 billion. This assumes a FEMA reimbursement rate of 75 percent of covered costs and necessary Congressional appropriations. Federal legislative action will be required to address the budget gap that will result once available FEMA funds and insurance proceeds are drawn down. This funding will be needed to address the significant local expenses that have been and will be incurred, including costs that are ineligible under FEMA such as hazard mitigation, long-term housing solutions, and shoreline restoration and protection.

The City will struggle to recover in the long term unless expedited federal funding is supplied. Congress has long funded the response and recovery from natural disasters in supplemental appropriations. In the past decade Congress has authorized supplemental appropriations after hurricanes, floods, and tornados including $120 billion worth of aid in several bills passed in the aftermath of Hurricane Katrina.

New York City agencies worked around the clock to implement preparatory measures to mitigate the effects of the storm as well as respond to its aftermath. Because of the sheer impact of destruction, many City agencies are only now beginning to focus on the recovery. For example, the Department of Transportation is estimating $1 billion in incremental costs, including nearly $800 million for street reconstruction alone. Additional federal assistance is required to ensure that the storm costs, currently estimated at $4.5 billion for City agencies, do not compromise the services and operations that New Yorkers rely on the City to provide.

Whether it was a small retail store in Coney Island that lost its inventory in a flood or a restaurant in Staten Island forced to close due to a loss of power, Hurricane Sandy caused an estimated $5.7 billion in lost gross product in the City. These businesses are crucial to the City’s economy and to the communities that rely on their services, and the work of recovery will not be complete until they are back in business.

Four weeks ago, as Sandy was approaching our shores, President Obama committed federal resources to this storm and its recovery. Since then we have worked closely with his Administration on everything from cleanup to temporary housing. With our combined efforts, I am confident that we can secure the funding needed to ensure the swiftest and smartest recovery for New York City. Thank you for your leadership on this issue. 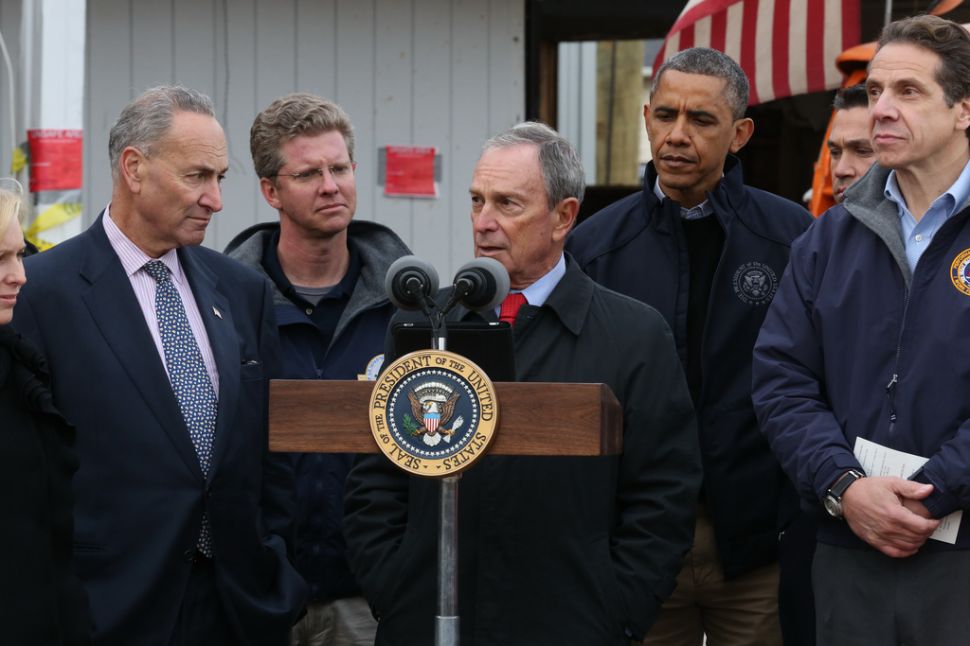