After months of rumors, Manhattan Borough President Scott Stringer has officially decided to run for City Comptroller next year. He was previously considering a campaign for mayor, but he said his experience exploring that race convinced him to run for the city’s top financial office. Mr. Stringer spoke to Politicker about his decision earlier today and said he will formally launch his campaign in three weeks. Rather than an avoidance of the crowded mayor’s race, Mr. Stringer characterized his entry into the comptroller race as a move to confront the most crucial issues currently facing the city.

“What’s needed right now is an experienced hand who can partner with the mayor when it’s in the best interests of the city, but also someone with the independence and backbone to stand up to special interests, to call out wasteful spending and to safeguard the city’s pension funds,” said Mr. Stringer. “That is what I’ve done my entire career and that’s what im going to as comptroller, so I’m not dropping down, I’m stepping up.”

As of now, Councilman Dan Garodnick is the only other candidate who has officially launched a campaign for comptroller. Councilman Domenic Recchia has also been mentioned as a potential candidate. This is a far less crowded field than the mayor’s race, which is expected to include Council Speaker Christine Quinn, former comptroller and 2009 mayoral runner up Bill Thompson, Public Advocate Bill de Blasio and the current Comptroller John Liu, among others. However, Mr. Stringer said city’s need for strong leadership on financial issues, specifically in the wake of the damage caused by Hurricane Sandy is what motivated him to enter the comptroller race rather than a desire to stay out of the mayoral fray.

“The comptroller’s office is important and it has never been more consequential,”  Mr. Stringer said. “I think I can contribute to helping to get the city back on sound financial footing and protect our most essential services.”

Mr. Stringer also noted the city economy was struggling prior to the hurricane with an “unemployment rate stuck at ten percent” and “budget gaps as far as the eye can see.”

“As I traveled the city exploring the mayor’s race, I heard from working people, middle class people about the economy….People are really struggling. There’s a sense that people are paying a lot of taxes and not getting the services to which they’re entitled,” said Mr. Stringer. “Someone’s got to watch out for peoples’ bottom line and I started to think that this could be an important way to serve the city. And I just decided this moment, because I think this office has never been more important. This new government that’s going to be constituted in January 2014 is something I wanted very much to be a part of and this is how I decided was the best way to serve.”

Mr. Stringer described himself as uniquely suited to the job given his “natural interest” and past experiences identifying reforms to cut costs in government programs.

In his role with NYCERS, Mr. Stringer said he “led the effort to ban placement agents who got money for doing nothing,” “pioneered important  reforms to integrate prinicples for a responsible investment in pension funds” and “played a very important role in getting the pension fund to initiate important policies for emerging managers that will diversify and maximize the talent there.” He also cited his experience analyzing large government contracts, including the Time Warner and Verizon contract renewals, as a member of the Franchise and Concession Review Committee.

“I’ve played a role in audits, played a role in pensions and, as a member of the FCRC–Franchise and Concession Review Committee, I’ve looked at and analyzed the big contracts,” said Mr. Stringer. “I have been in the room, negotiated, watched the comptrollers in that role. And when you put all that together, I think my skill set is something that really can help new yorkers with this job.”

“These are just a few New Yorkers who, I think signal that we’re going to run a broad-based five borough campaign that’s multiracial and diverse,” Mr. Stringer said.

In addition to his own endorsements, Mr. Stringer hinted he might be willing to make an endorsement in the mayor’s race.

“I haven’t decided who to endorse for mayor, but it’s possible,” he said. 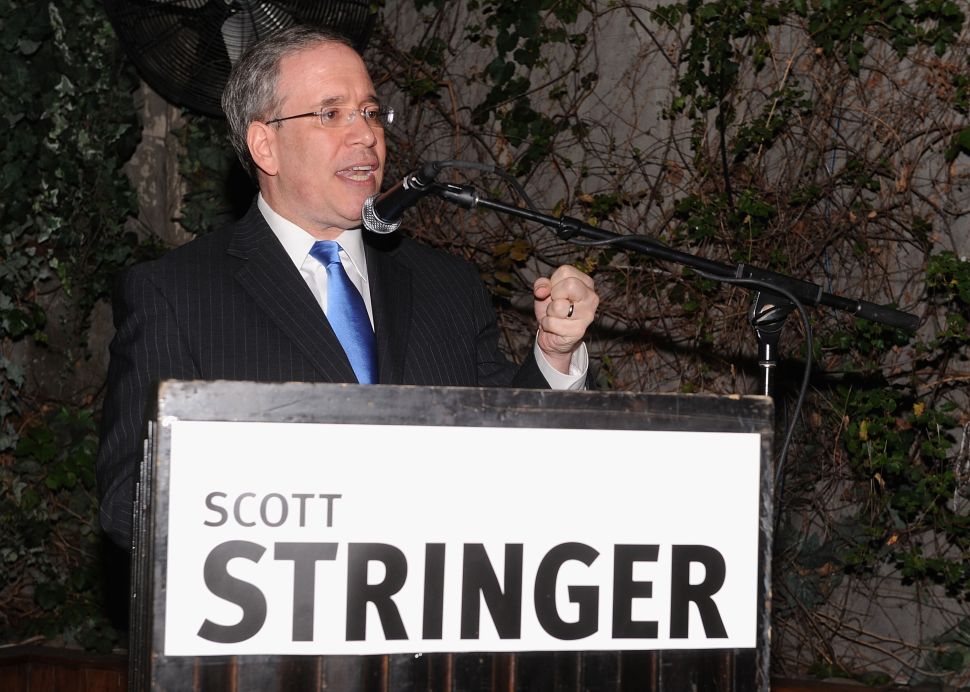