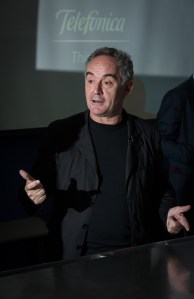 Last year, the storied three-Michelin-star restaurant El Bulli closed its doors in Roses, Spain, so that its chef of 27 years, Ferran Adrià, could focus on El Bulli Foundation, a mysterious institute that will do some sort of gastronomic research. To raise money for that endeavor, the foundation is selling off about 8,800 bottles of wine from the restaurant’s cellar. Over two sales next April at Sotheby’s, in Hong Kong and New York, it hopes to bring in $1.1 million to $1.6 million.

In 2008, Mr. Adrià participated in the 12th edition of Documenta, which is set every five years in Kassel, Germany. During the 100-day run of the show, 50 visitors were randomly selected to dine at the restaurant in Catalonia.

Here is a very intense video about the history of El Bulli with some glimpses of what Mr. Adrià has planned for the foundation.

For an art-inflected guide to a meal at El Bulli in 2008, head on over to Carolina Miranda’s C-Monster blog.