Against the backdrop of a possible Sweeney run for governor in 2013 and paid for by the New Jersey State Senate, the mailer references upcoming legislative hearings focused on the state’s rebuilding efforts in the wake of Hurricane Sandy.

“New Jersey has begun the long road to recovery from the destruction caused by Hurricane Sandy,” says Sweeney in a statement co-signed by a district senator, in this case, state Sen. Brian P. Stack (D-33).

“In recent weeks, our state has shown the world tremendous acts of courage, unbelievable kindness and the never-quit spirit of New Jerseyans that we know will pull us through this painful and devastating crisis,” adds Sweeney, horning in on Gov. Chris Christie’s attempt to fire-blanket Sandy as his vanguard re-election issue.

“As we work to recover from the devastation of Sandy, the process will soon transition to rebuilding,” says Sweeney. “In a bipartisan way, the State Senate is working to ensure the rebuilding process puts the state in a stronger position to face future disasters. We recently began a series of public hearings that will take place in storm-ravaged areas around the state. In addition to rebuilding the state’s barrier islands and flood-prone areas, the hearings will focus on improving responses to utility restoration, flood prevention, evacuations and ensuring impacted residents can obtain access to their homes in an orderly manner after a disaster.”

Derek Roseman, spokesman for the Senate Majority Office, responded in a statement in explanation of the mailer.

“It came from our operating budget. It is a way for legislators to communicate directly with their constituents with important information in response to the emergency conditions caused by Hurricane Sandy. It was offered to every member of the Senate, but the Republicans declined.”

“This is not just a matter of rebuilding and preparing, but rebuilding and preparing smarter,” writes Sweeney. “That said, our commitment to helping our neighbors should not begin, nor should it end, with tragedy. So as we recover from the storm, we continue to be mindful that many of our neighbors faced their own difficulties in New Jersey long before Sandy. As we work to rebuild the communities damaged or destroyed by Sandy and to guard against future storms, we should strive to rebuild the state’s economy and improve economic opportunity for everyone in our state. We know the path ahead is not easy, but it is one we must travel together. We are one New Jersey and we are at our best when we work together. As we pull ourselves up from the destruction caused by Sandy, we must also ensure that we make our entire state stronger so that we can create a better life for all New Jerseyans. We ask for your support in this effort because we know that together, we can get this done.”

Full mailer is below: 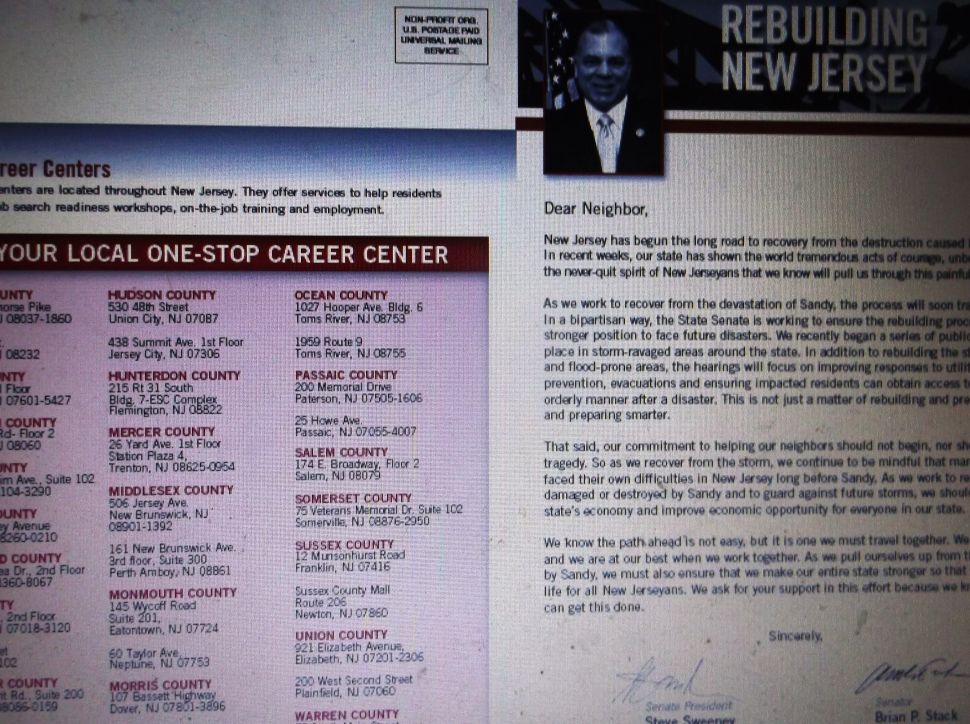