Is there currently a hole in your late-night drunken cable schedule? Leave it to SyFy to oblige. Entertainment Weekly reports that in February, the channel will debut a program called–no joke–Robot Combat League. It is exactly what it sounds like: Big-ass robots in a boxing cage, slugging away at each other.

Something similar has been in the works for quite a while, it seems:

“It has always been our desire — and it’s really come around perennially — to update and do Battle Bots for the new century,” says Syfy president Mark Stern. “Can we do Real Steel? Are we at a place where you can do real bipedal robots? Every time we tried to to do it [the project] was stymied by the technology.”

This is how technological revolutions happen: It’s just a theory, until suddenly it’s the basis for a reality show on basic cable.

WWE star Chris Jericho will be the host, because this is a show about fighting robots. Robotics expert Mark Setrakian, who’s built animatronic creatures for projects like Men in Black, will construct 12 robots and hand them over to 12 teams, each composed of a “robo-jockey” and “robo-tech.” The cast is a pretty high-octane bunch, including an Olympian, a race-car driver, and MMA fighter (and daughter to George) Amanda Lucas.

But let’s face it: Most of America doesn’t care about proper bipedal motion. America wants to know how much metal ass will be kicked.

Now that’s what reality TV should sound like, not hungover pitches to Dave McClure. 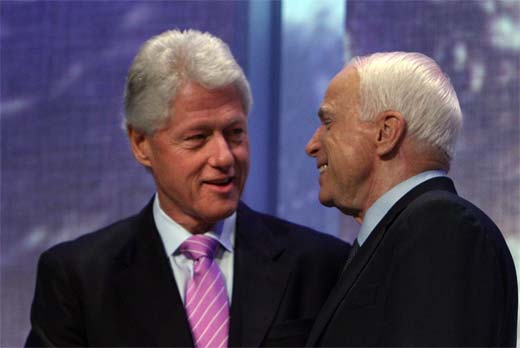