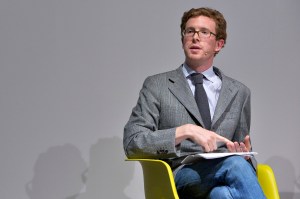 In a juicy edition of her weekly Inside Art column that was published online tonight, New York Times reporter Carol Vogel reveals that Nicholas Cullinan, curator of international modern and contemporary art at Tate Modern, has been tapped by the Met’s chairwoman of modern and contemporary art, Sheena Wagstaff, to become a curator in her department. Met watchers may recall that Ms. Wagstaff was hired away from Tate Modern early this year. She had served as that museum’s chief curator.

Many international art museums have been ramping up their contemporary art programs in recent years, hoping to attract the attention of wealthy donors, who are increasingly interested in the field—a fact underscored this week as postwar and contemporary art auctions brought in numbers that dwarfed those realized at last week’s Impressionist and modern sales.