When longtime Wired editor in chief Chris Anderson left his post earlier this month, it wasn’t for another Condé title or a sabbatical to write his fourth book. He decamped for a robotics startup. It’s just the latest sign, along with drones appearing on the cover of every magazine from The New Yorker to The Economist, that robotics is no longer relegated to science fiction.

New York has never been known as a robotics capital, unlike Boston, with its MIT hackers, or Pittsburgh, with its Carnegie Mellon engineers. But one Russian oligarch wants to change that.

In June, Dmitry Grishin launched Grishin Robotics, New York City’s first venture capital firm devoted wholly to personal robotics. Mr. Grishin is the CEO of Mail.ru, a Russian company that recently unloaded a large stake in Facebook, giving him cash to play with and allowing him to follow the pattern established by Mail.ru cofounder-turned-venture capitalist Yuri Milner. As Mr. Grishin told The Observer back in June, “Most of the VCs are focused on mobile applications, but you really need risk capital to improve this area. I want to focus fully on mass-market robotics.”

But Mr. Grishin remains in Russia, running the show at Mail.ru. It’s his business development director, Valery Komissarova, who’s laboring to turn this town into a thriving robotics hub. Her role is part sleuth, seeking out quiet but promising startups, and part booster club president, talking up the high-risk sector to other investors and would-be founders. “Entrepreneurs know the Mark Zuckerberg success stories, but in robotics, they don’t have such clear role models,” Ms. Komissarova told The Observer. She’d like to change that.

Her job isn’t as simple as establishing a meet-up and cruising co-working spots, however. Unlike the self-promoting social media types, this is a tough group to wrangle: robotics companies are often outright secretive, and even the more open ones are commonly toiling away on very specific problems. But if anybody can pull this off, it’s the cool Ms. Komissarova.

Next: Phineas Barnes, First Round Capital: the Bottom-Up Investor

Back to the beginning. 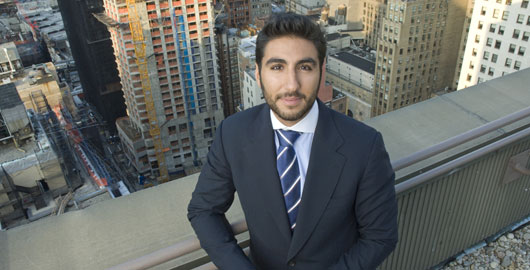