If you have been spending your days reading only the A section of The New York Times lately, we can forgive you for thinking that this weekend’s NYC marathon might be canceled over something as mercurial as a hurricane. After all, that’s what Manhattan Borough President Scott Stringer said today: That holding a major event in a city while its still reeling from a crisis is potentially not the best idea. (Although hey, it certainly would be the fastest way to get over any of New York’s bridges.)

And that makes sense, at least on the surface. But dig a little deeper … say, to Thursday Styles, and you’ll find out the real reason people don’t want to spend Sunday running around a ghost town. They’re afraid someone will take a stupid picture of them. “Marathon Photos Often Fail to Capture the Glory” reads the led of this poorly-timed faux-trend piece in yesterday’s New York Times, which claimed that photo agencies like Brightroom were responsible for all the terrible things that could possibly happen whilst one was participating in a run.

“Sadly — horribly — the list of ways these photos can and almost always do go wrong is wide and deep: Muffin top. Earthquake quads. Wind in the shorts, making it look as if you’re wearing your derrière backward. Front wedgies. Let’s not even get started on facial expressions.”

Elizabeth Weil ominously adds that there are 110 official photographers expected at Sunday’s marathon before interviewing a bunch of people who benefit from your neurotic fear of looking silly during a race: the CEO of female athletic wear Oiselle; the host of a new Travel Channel show with the tagline “Americans will do just about anything to entertain themselves“; the journalist’s husband; an exec from Brightroom; a photographer, and a woman who has authored both Run Like a Mother and Train Like a Mother.

And while the pieces does quickly nod to the Hurricane Sandy debate twice, there’s a much higher word count placed on Ridiculously Photogenic Guy Zeddie Little, whose inadvertent ascendance to handsome man meme-hood is actually to blame for people not wanting to run a marathon. 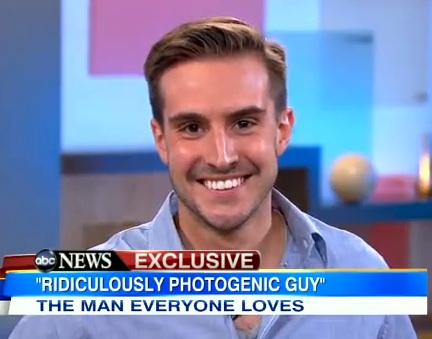