Poor Justin Peters. The Slate scribe probably hadn’t heard about The Times Is on It Twitter account when he signed up to do what most of us would consider the impossible (or at least the super-foolish): Try to “embody” seven trends created discovered by the NYT’s Style Section, to become the most stylish man in New York. (Except, obviously, Brooklyn.)

So what did these seven trends entail? Growing a beard (“Oh, to Be Just Another Bearded Face,” May 30); using cockney slang (“Americans Are Barmy Over Britishisms,” Oct. 10); putting 30 pillows on the bed (“A Nation Lulled to Sleep,” Feb 10); a happy hour dance party/gym class (“Would You Like a Cocktail With That Workout?” March 7); wearing a man-bun and imitating gap teeth with tooth-black (“Generation Gap: Look Who’s Smiling Now,” Feb 15 and “Spare a Hair Band? A Man Bun to Go,” Jan. 25), and getting a “he-wax” (“A He-Wax for Him,” April 10).

Luckily, those seven trends weren’t done simultaneously, or else we doubt Mr. Peters would have survived the ordeal. (Getting a genital wax while working out with energy shots? Blimey!) He did, however, yell at several non-bearded men at Brooklyn Flea, harassed exhibitors at the Agenda: NYC trade show, and had a really good night’s sleep (among other things). Conclusion? Trying to keep up with trend stories will make other people think you are insane, or an idiot, or a writer. Like when Mr. Peters tries to mock a beardless gentleman, because according to the Times, some men now “face ridicule” for not having facial hair.

We just want to know: Where does he stand on wearing pantyhose with Spanx? Skirts? My god, there are just so many things we need to know about, trend-wise! 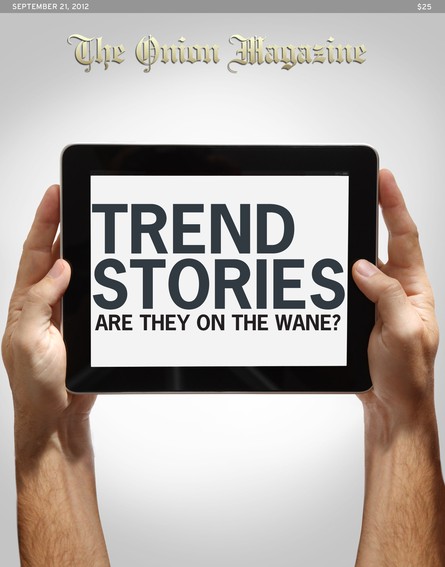