The green lines are downed trees, the red dots are washouts. (Matt Chaban)

The good news is, the subways are coming back to life with remarkable resilience. The bad news is even more would be running if there were power in Lower Manhattan.

Following a briefing with Gov. Cuomo this evening, MTA chairman and CEO Joe Lhota walked reporters through the status of the city’s subway system and the regional rail lines. As of now, the M train is running again in Queens and Brooklyn in two sections: from Jamiaca Center in Queens to Midtown, though it is skipping Queens Plaza and Court Square and getting to 42nd Street via the F line tunnel, and the M train shuttle from Middle Village in Queens to Myrtle Avenue.

The 7 train will also begin service tomorrow, possibly as soon as midnight, but only from Main Street in Flushing to 74th Street, Broadway Station. From there, straphangers can transfer to the F or M trains into Manhattan.

“We’re going to bring service back as quickly as possible,” Mr. Lhota said, “but we are going to be doing it incrementally.

Now, if Con Edison had not already come in for enough grief, the Lexington Line would be fully operational from the Bronx to Brooklyn, as would the F train from Queens to just before Coney Island in Brooklyn, if only there were power downtown. On the bright side, Mr. Lhota said he could full restore power to those lines within two hours of the system regaining power, but that is still not expected until the weekend.

So while the MTA has done a breathtaking job pumping out the East River subway lines–a third, for the 2/3 line is clear of water but not yet operational, and more are expected to be emptied out by tomorrow–there is little to do to finish the massive doughnut hole in the subway system until power is back.

“We’re waiting on power,” Mr. Lhota said. “It’s really important, we can’t do it without that third rail lit.”

You can find the current service map here. 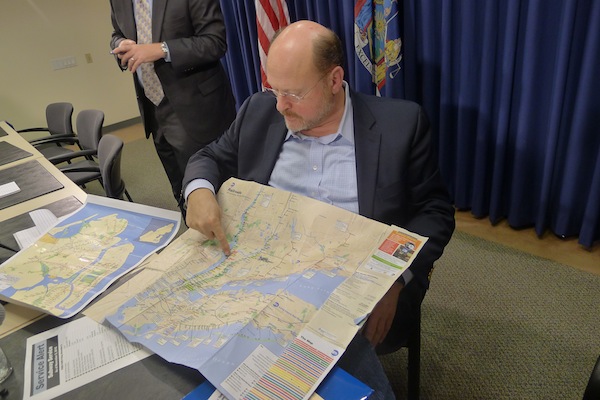