“Definitely Cory Booker, yes, I think he’d be an excellent nominee,” Weinberg told PolitickerNJ.com. “He has everything people look for in a candidate: he has the gravitas, the finanicial ability and he has the broad support throughout the state, including support from the African-American community and from the gay rights community. He’s got that persona, and I would think if Cory Booker wants it, the nomination is his.”

She and Booker have political ties that go back as least as far as the 2008 presidential campaign, when Weinberg joined Booker as an early Democratic Primary supporter of President Barack Obama’s.

She said she sees evidence that Booker is serious about running for governor next year.

“I spent a little time with him at the Democratic Convention in Charlotte and certainly he and his people behaved like people interested in a gubernatorial run,” the Senate majority leader said. 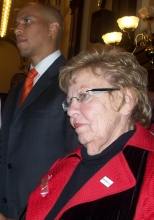