OVER IN DUMBO, Suzanne Kim, the director of exhibitions at Smack Mellon, a nonprofit gallery and artist studio program, wore a garbage bag cinched at the waist and yellow gloves as she worked with a team of artists in matching garbage bag tunics to pick through materials like a pile of gleaming sports trophies that were laid out on tables outside the building. “Everything that’s non-porous is being cleaned,” she said. “What’s porous is being thrown out.”

“For hurricane Irene, we got six inches,” she said. So as soon as they heard forecasts of Sandy, they notified the artists in their studio program, a residency run out of their basement, and advised them to put everything up on tables or in the small office on the main gallery floor. On Sunday, with some artists still out of town, they moved as much art as they could into the office. But it was much worse than Irene, and all seven artists in the program lost irreplaceable work and materials.

The program also lost its media room, which had two full editing suites, as well as a wood shop and a metal shop. Thanks to the landlord—Two Trees Management—artists will be temporarily setting up shop at 111 Front Street, where they’ll be in good company among the other galleries in the building, such as Dumbo Arts Center.

Ms. Kim said that Smack Mellon didn’t have flood insurance due to the high cost of such insurance for areas anywhere in a flood zone. “Our broker told us some policies cost $5,000 for $15,000 worth of coverage. Being a nonprofit running as lean as we do, that’s not something that was going to work.”

Around the corner at Rabbithole, a set of basement studios in a hard-hit building, artist Donna-Maree Wilding was tearing up the sopping floorboards in the space where she runs a children’s workshop called Creatively Wild Art Studio, bundling them and depositing them in the Dumpster outside. She walked The Observer through the warren of studios and showed us how the had trailed through the rooms, soaking everything in its wake. On top of that, she was getting complaints about the floorboards in the Dumpster.

Artists whose studios are in other parts of the city weren’t as worried. When we spoke with Jonah Freeman last week, he hadn’t yet been back to his studio in Ridgewood, where all of his supplies had been covered in plastic and the expensive materials moved to the center of the room. “I don’t know what’s going on over there, but I assume that that’s probably okay as well, unless there are some leaks in the roof. But it didn’t seem like there was a lot of coming down from the sky. It seems like there were summer storms that were more dramatic than this.”

Like Mr. Freeman, artist Olaf Breuning didn’t experience much damage, having escaped to his house in Upstate New York during the storm. Then he returned to Tribeca, where he and his wife Makiko lived for three days without power, visiting friends in “the light zone” to take showers and charge electrical gadgets. “I think I was very lucky after all, and not a victim of the whole situation,” he told The Observer over email. Spared from any loss, he addressed the storm’s aesthetic aspects. “I saw more the beauty in the change of situations. To realize one time more that without power we have nothing, especially in a city like New York. For me it was an experience.” 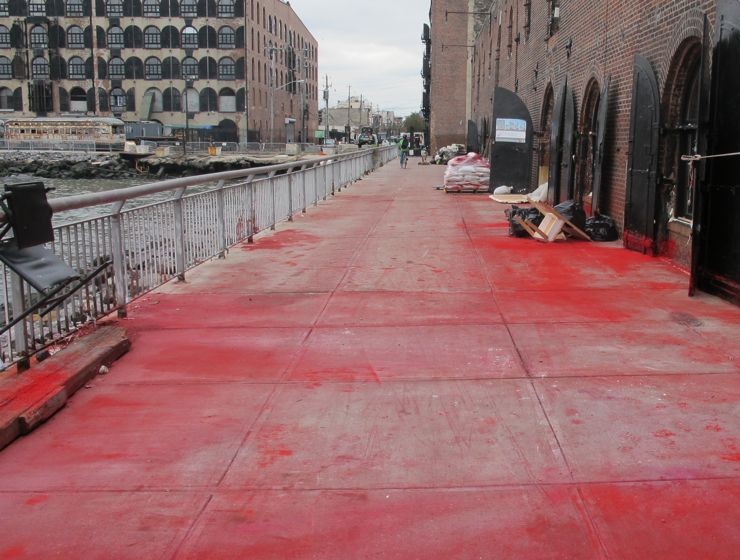