The guy’s post Sandy polling numbers were off the charts on the week he announced his intentions to run for a second term of one of the worst run states (see below) in the country. Democrats are in two camps: those in disarray and dismay; and those with connective tissue to the governor happy to have him well positioned for 2013.

The former Bergenfield attorney’s not going to jail for mail fraud, a judge announced this week, enabling Oury to chalk up a big victory in New Jersey politics. Watch, he’ll get a statue next.

See above. The Newark North Ward councilman worked in concert with Butler to land Booker a majority.

The state Attorney General bagged 15 suspects in a major heroin bust based in Paterson. We thought when he got the job he’d be rolling more heads in city halls than heroin mills, but it’s cool.

In Jersey, there’s Sandy bipartisanship and then there’s Junk bipartisanship. In another example of Dems and Republicans working together, the Passaic County Sheriff stood at Chiesa’s side during the drug bust press conference and basked in Chiesa’s praise as he heads toward a re-election year.

The Paterson council candidate defeated Sonia Torres and Aslon Goow to unofficially become the next councilman from the Second Ward. A big win for the Bangladeshi community.

By a unanimous vote, the 9th District Congressman’s colleagues this week elected him to the position of Democratic Regional Whip for the 113th Congress. Talk about ubiquity. This guy’s turning into the Tony Mack of the winner’s column.

The class act mayor must be having a good day when Christie and Pallone line up in support of rebuilding Belmar.

We love our politicians here, the backslapping, deal-cutting scoundrels who will never be the subject of a Steven Speilberg movie. (Oh, yeah. New Jersey voted against Lincoln, by the way, the man, not the movie). But whether or not our pols, from George McClellan to Corzine to Christie – are the cause of all our collective torment, suffice to say the state doesn’t need a hurricane to do untold damage, according to 24/7 Wall Street, which this week listed NJ as one of the worst states in the country. According to the report, between 2010 and 2011, New Jersey’s GDP contracted by 0.5 percent, more than all but three other states. The Garden State’s tax burden was second highest in the U.S. in 2010. Residents paid 12.4 percent of their income in state and local taxes, higher than any other state except New York.

He can spin it however he wants. Just look at the tape. Whether he was slapping at the Holy Bible or shoving Shanique Davis Speight, the South Ward labor leader grotesquely exercised his political will at last week’s Newark City Council meeting. He arguably had a good case. But getting physical is not the way to express outrage.

Barring legal action that overturns the mayor’s tiebreaking vote, the Iraq AND Afghanistan War veteran – and son of former Newark Mayor Sharpe James – lost his best shot at getting seated on the council this year. But there’s always that special election next year…

Convicted of accepting a bribe from a local insurance broker in exchange for help with a contract, the Hamilton mayor who ran in part on a platform of cleaning up town hall stepped down from his post in disgrace.

The former director of marketing for Birdsall Services Group pleaded guilty today for his role in a scheme to circumvent the state’s pay to play law by disguising illegal corporate political contributions as personal contributions of employees of the firm.

The tragedy of Goow’s Ward 2 council loss is he’s arguably the only guy the Democratic Party has right now who could shout down Gov. Chris Christie. If you think Christie is tough with a microphone in his hand, check out some of Goow’s greatest YouTube hits when he was Paterson council president.

A poll released this week showed the Newark mayor 19 points behind incumbent Gov. Christie. And this is the guy who would clear the Democratic Party field if he runs. In the throes of misery, one Democratic Party operative this week told PolitickerNJ.com the party might have to look outside the box, to Wall Street, for a savior to run against Christie. You mean like Jon Corzine?

The former mayor’s wife Sonia lost in her bid to secure the Ward 2 Council seat, hobbling Torres’s chances at being able to exact a 2014 comeback against the politically damaged Mayor Jeff Jones.

The Hunterdon County Democrat finally tapped out after recording her second straight campaign loss in as many tries in a bid to break up the GOP stranglehold on LD 16. 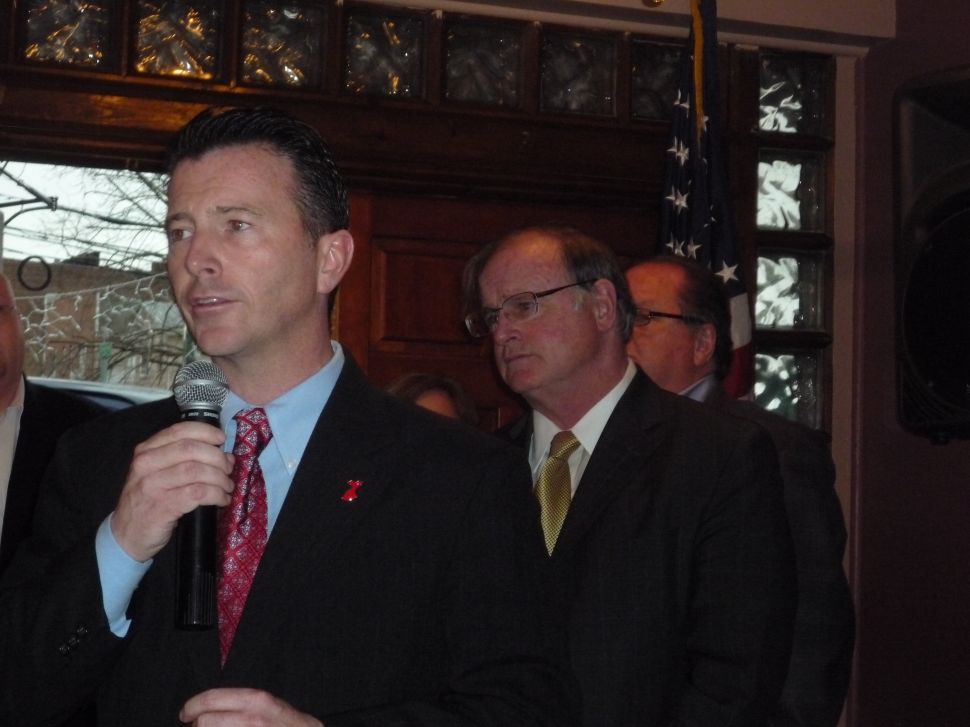