A screengrab from the failed campaign.

Good news for the MMORPG enthusiasts out there: Democrat Colleen Lachowicz won her race for a state Senate seat, despite a campaign to convince voters her World of Warcraft hobby rendered her unfit for public office.

In the run-up to election day, someone created a website called “Colleen’s World,” which complained that, “In Colleen’s online fantasy world, she gets away with crude, vicious and violent comments…. Maine needs a State Senator that lives in the real world, not in Colleen’s fantasy world.” But it seems the residents of Maine were unconvinced. The AP reports she cinched the race with 913 votes.

Everquest, however, remains beyond the pale. 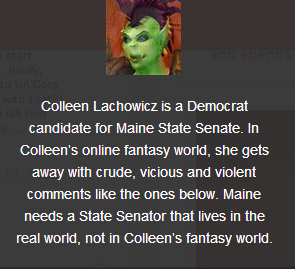