Not long after Hurricane Sandy had picked up a good part of the East River and dumped it on Greenpoint, Reuters photographer Gary He stood on the Pulaski Bridge, snapping photos of the partially blacked-out skyline of Manhattan. He was on his way back to his car to transmit the pictures when he ended up taking one of the most comically iconic images of the storm’s aftermath: the Brooklyn Snorkelers.

“I saw a few people wading around below,” he told The Observer. “The was three or four feet deep, so I figured I’d get what I could from the bridge, since I’m not too keen on swimming in Newton Creek overflow. When I looked through the viewfinder, I saw that one of the guys was wearing a snorkeling mask, so I went down the stairs get a closer shot. I asked them why they were out, and they just responded that they were going to rescue a friend.”

The snorkelers were Mike Lee, James Maher and Lennon Bergland, who was outside the frame.  Mr. Lee explained that the three friends were going in search of a friend who was stranded on top of her building. The was cold and smelled like gasoline, he said, adding, “I’d like to emphasize that at no point did we put our heads underwater.”

“They were incredible lucky,” said Ashley Mortenson, M.D., an emergency room physician formerly with New York Beth Israel. “People with Hep A and other communicable illnesses defecate into the sewer system, not to mention the toxic chemicals that get mixed in during a flood.”

“Even if that just gets on your mouth or a musocal membrane, you may be in for a rough few days,” said Leonard Bielory, M.D., of Rutgers University.

Happily, Mr. Lee reports that he and his friends are feeling fine.

Here’s the thing about hurricanes: even after the immediate risks subside and the floodwaters recede, secondary hazards remain for weeks and months, most notably contaminated , infectious diseases and toxic mold. Without electricity,  pumps and wastewater treatment plants can’t function,”  said Matt DaRin, principal of BluePoint Environmental. As a result, affected areas of New York and New Jersey have been facing the same issues grappled with throughout the third world.

Storm from the hurricane overloaded the sewage system, flooding parts of New York City and New Jersey to a depth of 13 feet above sea level with a sludge of river , human feces and contaminated industrial sediment. Floodwaters can also contain a wide range of other toxins, including chemicals from cars, dry cleaners and gas stations, and household chemicals such as paints, pesticides and solvents that had been stored in basements. For people exposed to floodwaters—including hundreds if not thousands of good samaritans currently hip-deep in muck—these industrial chemicals can also be absorbed through the skin and increase a person’s future risk of cancer.

Eleven years ago, New Yorkers rushed to “the pile” to dig through the rubble of the World Trade Center, and many are now experiencing the after-effects of exposure to a stew of toxins. Indeed, the Sept. 11 Victim Compensation Fund has allocated nearly $4.3 billion to the 40,000 to 90,000 people who have experienced serious medical issues linked to their participation in the recovery efforts. It’s altogether possible that some of Sandy’s cost won’t be felt for years to come.

Exposure to floodwater is dangerous, and doctors are already seeing repercussions “There is a serious risk of diarrheal illnesses such as E. coli or salmonella, as well as hepatitis A. If you get a laceration while in the floodwaters, you run the risk of sepsis from raw sewage,” said Dr. Mortenson, “It’s the perfect setup for skin infections.”

The storm overflow from the Hurricane Sandy caused the polluted Gowanus Canal to spill over its banks, and it is difficult to trace where the contaminated went from there. In addition to industrial chemicals and high levels of lead in the canal sediment, the Gowanus Canal is perhaps best known for harboring active strains of gonorrhea.

The floodwaters that overwhelmed the Gowanus and other formerly industrial locations have also stirred up contaminated sediment—containing arsenic and carcinogens such as PAHs and PCBs—mixing it with raw sewage and disperse it across residential areas.

Particularly in New Jersey, home to numerous industrial brownfields or Superfund sites, floodwaters may have breached some of the asphalt barriers meant to seal in the toxins, mixing contaminated soil into the waters that spread farther into adjacent neighborhoods and even playgrounds and dog runs.

Now’s probably a good time to get a flu shot. “When you have hundreds of thousands of people throughout New York and New Jersey sleeping in unheated apartments for several days—along with limited access to fresh food and potable —you’ve got conditions that can lead to a cold or flu outbreak,” Dr. Mortenson pointed out. “Whenever you crowd sick people together with a large population that has compromised immunity, you’ve got a giant incubator for communicable disease.”

Sandy’s timing was probably a blessing—and not only because the proximity to the election likely helped turn on the spigot of federal assistance.

“The cold weather has worked in our favor in a few ways,” Dr. Bielory added. Critical medicines, including insulin, “would go bad much faster without refrigeration if this had happened in the summer,” he said. And it’s also too cold for mosquitoes and flies to breed in the standing throughout New York and New Jersey, so there is less risk of a West Nile virus breakout.”

Another bit of good news: low temperatures are inhibiting mold growth, though buildings that harbored standing for any period of time are susceptible.

“The first 48 to 72 hours after a flood situation are the most critical. If is allowed to stand after that, the probability of mold grows exponentially,” said Mr. DaRin of BluePoint Environmental. “Right now, the cold weather is working in our favor, but as power is restored and heat comes back on, it’s a different story.

Any standing can lead to mold, but problems can become more severe when stormwater runoff contains raw sewage, biological contaminants (such as bacteria, viruses, pathogens, and mold) and toxic chemicals (such as fuel oil, herbicides and pesticides). “As the floodwaters dry, some of the contaminants will become airborne particles,” said Mr. DaRin. “In the buildings with standing , these mold particles can get into the HVAC systems and cause widespread issues.”

People have different sensitivity to molds. Those with allergies, asthma or compromised immunity (such as those going through chemotherapy) are considerably more susceptible to complications from indoor mold exposure. “This has the potential to be a serious issue for Hurricane Sandy, since New York City has some of the highest rates of childhood asthma in the United States, with some neighborhoods up to 12 times the national average,” Dr. Mortenson pointed out.

New Yorkers, ever an ingenious bunch, devised their own ways of dealing with potential toxins during the immediate aftermath.

A hedge fund put up several of its traders at a downtown hotel to allow them to remain close to the office to monitor their trading positions. “The coming out of the hotel taps was brown,” one of the traders told The Observer. “I had no way of knowing if this was rust or sewage. We tried to remember if you could make the drinkable by putting iodine pills into it, or chlorine, or something else entirely. But no internet, so no Wikipedia. We compromised by pretending we were in a foreign country and just drank lots of gin. Quinine, right?” 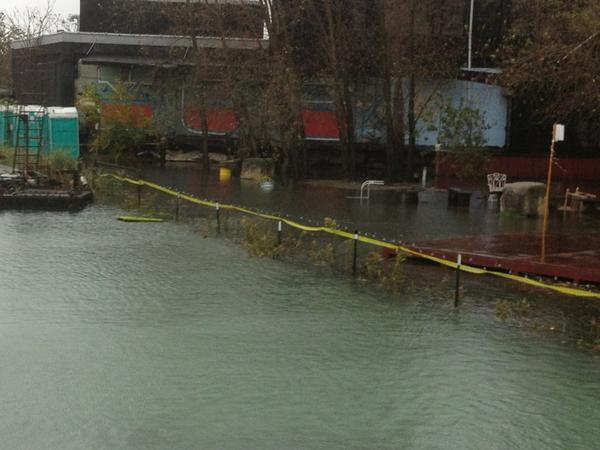