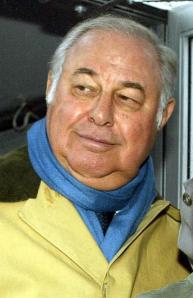 Nicole Rock, a former flight attendant on the private plane of Alfred Taubman, the billionaire shopping-mall developer who once owned Sotheby’s, has filed a $29 million suit against her old boss, alleging he sexually harassed her on numerous occasions, according to the New York Post. Taubman, who served about nine months in prison after being found guilty of participating in a price-fixing scheme in 2001, has denied harassing her.

Among the allegations leveled against Taubman by Ms. Rock in her suit, via the Post:

— “He forced her hand on his crotch on one occasion and tore a hole in her panty-hose when he grabbed her crotch on another.

— “During a flight, Taubman pushed Rock onto his bed in the rear cabin of his plane, “forcefully attempted to perform oral sex on her” and screamed at her, ‘I said, Lay down!'”

Taubman told the Post through a spokesperson that he will fight Ms. Rock’s charges “through the appropriate legal channels.”