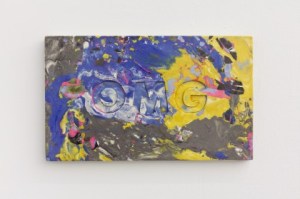 Ever since Claes Oldenberg proposed making a teddy bear large enough to obstruct a Manhattan intersection, shading the banal into the monumental has been a favorite sport of artists with a liking for the absurd—and the requisite Koonsian ego. This month, Soho nonprofit the Swiss Institute plays host to another variation on the time-honored theme, with uneven results. Elements of Amy O’Neill’s “HLUSA” are striking enough, but, while not without its subtleties and potentials, the project as a whole doesn’t add quite enough to the inherent fascination of its subject to make for something likely to endure as an independent meditation.

Ms. O’Neill’s show, which takes its title from an abandoned biblical theme park called Holy Land USA, pairs a video of the park’s site with a linked array of sculptures and paintings. The show’s namesake roadside curiosity is located in Waterbury, Conn., but, as depicted here, it appears isolated from its real-world environs inside a bubble of wistful fantasy and picturesque decay. A weird blend of low-rent tourist attraction and outsider art endeavor, its battered faux-Egyptian and faux-Israelite mini-buildings are sign-posted by faded hand-lettered signs indicating key sites such as Herod’s Palace and the Wailing Wall. Even without the wintry light and choral soundtrack, it would be difficult to go far wrong with this gift of a subject, layering as it does a haunting melancholia over an instance of down-home American eccentricity.

In the main gallery, a walled enclosure houses three long rows of pyramidal sculptures. Cast in gypsum cement and embedded with shreds of burlap sacking, these dun-colored forms supposedly reference scenes from the video, but come across more as generalized references to its shabby, windblown texture. Some of them are also embossed with fragments of text drawn from the abbreviated languages of tweeting, text messaging and slang, some more familiar than others. Will any of these emergent verbal constructions last as long as the tombs at Giza, or be considered as emblematic of a culture millennia hence? Ms. O’Neill implies that not only can we never know, but that even hazarding a guess is something of an Ozymandian exercise.

A row of small panel paintings in the gallery’s mezzanine repeats this point, its spattered, multicolored fasciae embossed with abbreviations and acronyms: “DOA,” “IDK,” “TOS” and the all-conquering “OMG.” Unfortunately, piling example on example adds little to the project in terms of complexity, and the ugliness of these works’ surfaces (are they meant to suggest marble?) is a visual turn-off that lingers in the memory for all the wrong reasons. More effective, because at once simpler and more actually monumental in scale, is the work on the Swiss Institute’s silvery exterior. The three “words” “ZEB,” “PEC” and “SOP” have been painted in simple black capitals across the brick façade in a font that strongly resembles one favored by Jenny Holzer. The use of existing architecture rather than a simulation or suggestion thereof adds heft to Ms. O’Neill’s representation of language, thought and belief as fleeting, at least in their specifics.