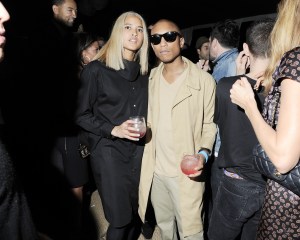 Helen Lasichanh and Pharrell Williams at the Chanel-Art.sy party. (PMC)

Late last Wednesday night, just hours after the VIP preview day of Art Basel Miami Beach came to a close, hundreds gathered on the beach behind Soho House to drink and dance at an after-party for a dinner hosted by Chanel and the website Art.sy. Martha Stewart had left after the meal, but others lingered. Hip-hop mogul Russell Simmons, arm wrapped around a young woman, posed for a photo. Rapper, producer and, more recently, designer and author Pharrell Williams, in sunglasses and khaki, stood by as some revelers downed shots at the bar. Annie Lennox’s “Walking on Broken Glass” blasted from inside the tent, a great song, though maybe not the one you want to hear right before you toss off your shoes to lounge on the sand. 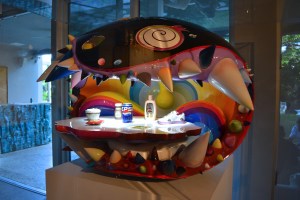 Pharrell is a veteran of the scene at Art Basel Miami Beach. Three Basels ago, he teamed up with Takashi Murakami and Jacob Arabo, a k a Jacob the Jeweler, to make an artwork called Simple Things, a sculpture studded with some 26,000 gems that depicts a large, fierce-looking anime figure who bears on his tongue a Pepsi can, a Doritos bag and other objects. “I wanted people to see the value of simple things with some of the staples of American culture,” Pharrell said at the time. At the 2009 fair, Paris’s Emmanuel Perrotin sold it for a much-ballyhooed $2 million. This year, Perrotin presented it in a pop-up show at a nondescript office building in the Wynwood district, without any real fanfare. It looked like some ancient relic—today’s fastest money has floated on to other things.

The names of the brands and the celebrities and the super young must-buy artists at Basel change each year. This year’s stars included Playboy, Absolut and Valentino; KimYe, Will Ferrell and Will Smith; and, well, let’s spare the artists, who can’t be blamed for the vagaries of collectors. An assistant director of a New York gallery at Basel declared that she could have sold a piece by one young artist, whose works go for five figures and who just had his first solo show two years ago, to 20 different collectors. At first she sounded proud, but as she spoke, she seemed to marvel at the fact and, for a moment, she looked baffled.

Come December, it’s no longer even a question whether the wealthy will show up at Art Basel Miami Beach and spend. They will, everyone assumes, and they did this year, even as Europe’s three-year-old debt crisis dragged on. The New York Times tried to raise concerns about the absence of mega-buying hedge funder Steven Cohen—he’s having a tough time legally and stayed home—but dealers and advisers brushed that aside. Demand, we are told, remains strong, international, insatiable. 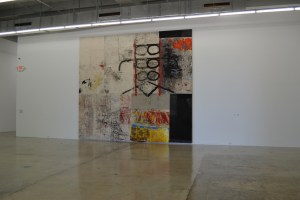 A painting by Murillo at the Rubell Collection. (The New York Observer)

Would we want it any other way? I want an art world awash in money, with even more flowing than right now. Really. But I would like the money to be smarter, even marginally so, and stupid money is everywhere during Art Basel Miami Beach. That is nowhere more in evidence than at the private museums, where area collectors like the Rubells and the de la Cruzes show their holdings, which are disconcertingly similar, giant-sized and, for the most part, made by men. This year the Rubells offered up huge, horrendously derivative paintings by their latest find, the 26-year-old artist Oscar Murillo. It’s not just that “people have way too much money,” as Wade Guyton, who figures prominently in the de la Cruz collection, rather nicely put it recently, it’s that it’s being spent so narrowly, on investment-grade artworks rather than in such a way that it would support a range of artists and constitute meaningful cultural patronage. 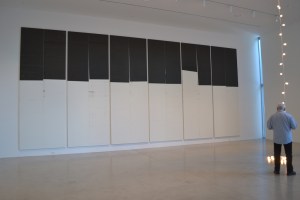 When Eli Broad shows up at Gagosian Gallery’s hilariously overstuffed booth at Basel and buys a Jeff Koons sculpture of Buster Keaton on a horse priced at around $5 million, as he did this go-round, he’s spending a bundle on one bauble, rather than spreading the wealth and influencing culture in more interesting, thoughtful ways.

Fifty blocks north of the convention center that houses Art Basel Miami Beach, at the fair put on by the New Art Dealers Alliance, or at the nearby Untitled or Miami Project fairs, Mr. Broad could have bought up whole booths—a pretty sizable portion of any of those fairs—for that sum of money. He could have purchased 1,000 paintings at $5,000 a pop, supporting a whole ecosystem of dealers and artists, who spent their week in Miami not at the next grand party, the next fashion dinner, the next beachside barbecue bash, the next pop-up club, the next New York Yankee’s house, like collectors and writers and other hangers-on, but at dive-y places like the Sand Bar and the Deuce.

How you feel after a week at Art Basel Miami Beach generally aligns pretty closely with how you feel about the art world as a whole. All of the art world’s machinations are there, sped up, happening all at once—the ass-kissing and prestige-building taking place as deals are made, money changes hands and one party spills into the next. Which is why, I suspect, as friends recovered and debriefed at the airport on Saturday night or caught up by text and email on Sunday, the general feeling was a conflicted one, the default position for anyone with a modicum of sense in today’s art industry. “Miami elicits deep ambivalence,” David Velasco wrote on Artforum.com. “It’s something to watch people go through the motions of guilt.” Like, say, when you’re enjoying gin and tonics and chocolate-chip cookies at a party hosted by Wendi Murdoch and Dasha Zhukova and others.

What is also down there in Miami, of course, is the potential for a real discovery—for finding that artwork that knocks your socks off. That happens only rarely. Even at NADA, where artists and dealers actually have some fight in them, there’s still too much of the same—too many shoddy, garish neon-colored sculptures that look like they were pulled from the Internet or a Ryan Trecartin video, too many nth-generation abstract paintings that look just smart enough. (But as a friend pointed out, what else are young artists, looking to survive, supposed to make? Space and time to actually make things, especially big or ambitious things, are expensive, particularly in New York, and these works, however lackluster, sell.) 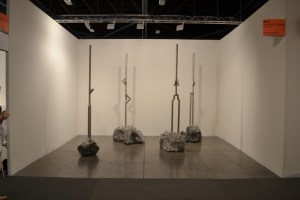 But when that flicker of discovery happens, it feels great. It happened for me while watching a D’Ette Nogle video at the NADA booth of Clifton Benevento that is just a minute long and shows the artist learning how to dance the dougie from a student at the high school where she teaches in Los Angeles. It happened again on a wall of Real Fine Arts’ tiny NADA booth, which was lined with miniature paintings that Dave Miko has done over the past 10 years that are variously hilarious and creepy and goofy and smart, and sometimes all those things at once. And also at Basel, seeing shambolic new abstract paintings by Laura Owens at Gavin Brown and shockingly austere sculptures by Andra Ursuta—metal piping embedded in rocks—at Ramiken Crucible, and being told by London dealer Sadie Coles that she had a work on offer by Darren Bader called pretty face but, no, she was not sure where he or she was at the fair. 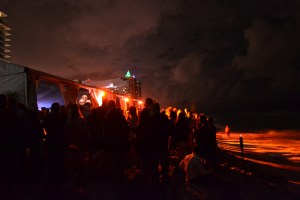 Shortly before midnight at that Wednesday night party, after visiting Basel, I was introduced to Carter Cleveland, Art.sy’s founder, on the beach. He was standing near the water and pointed out that the waves were crashing ashore much higher than at last year’s party. Some of the beach had disappeared over the past 12 months. Consequently, it felt more crowded than last year. The weather has been rough in 2012. The winds are picking up. For now, though, the party is still on.