Before a packed crowd of reporters earlier today, Mayor Michael Bloomberg and a phalanx of gun violence victims’ families held a press conference in order to rail against the federal government for their inaction in addressing shootings, especially in the wake of last Friday’s gruesome massacre at a Connecticut elementary school.

“We here urge the president to include all three of these steps in any legislative package he sends to Congress,” he said. “We urge him to assembly a legislative package quickly so that gun violence can be the first order of business…that the new Congress takes up when it convenes in January. I think the millions of Americans who have been affected by gun violence, including the individuals standing with me today, deserve nothing less.”

The mayor also listed the things President Barack Obama could implement with “a single stroke of his pen,” including enforcing existing laws against those who give false information in their background checks and appointing a head to the  Bureau of Alcohol, Tobacco and Firearms. He said he hadn’t spoken to Mr. Obama since the shooting spree in Connecticut, however, but he “endorsed him because he said he believes in rational use of guns in this country, and I expect him to do exactly that.”

Also, Mr. Bloomberg, unsurprisingly, wasn’t impressed with any argument that the federal government should be focused instead on averting the so-called “fiscal cliff” if a budget deal isn’t reached.

“The President and Congress can and should address these measures at the same time they’re reaching an agreement on avoiding the fiscal cliff,” he said preemptively. “These things have nothing to do with one another. If Congress and President can’t focus on two things at once, who on Earth did we elect?…This is not a partisan issue. This is just a bunch of people I think are cowed by the N.R.A. “

To stress the urgency of the issue, Mayors Against Illegal Guns released a number of testimonial videos from those affected by gun violence, many of whom were standing next to him today.  Here’s one of them:
[youtube=http://www.youtube.com/watch?v=JYOvzm48W-E&w=560&h=315] 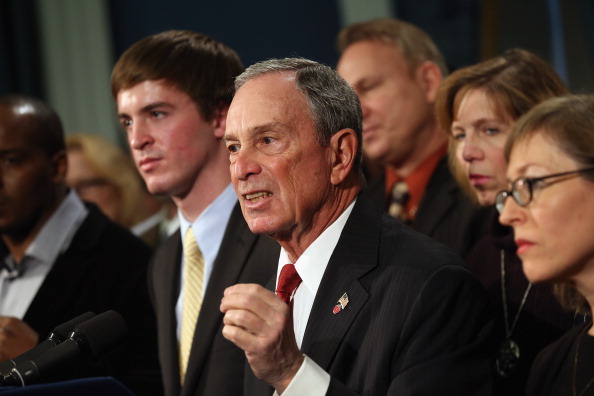