“I’ve got your backs,” Booker told the two chairmen, who told the mayor they’re worried about the potential for down-ballot damage next year when Gov. Chris Christie runs for re-election.

It wasn’t an announcement of Booker’s decision regarding a challenge to Christie – the one that’s supposed to come within days.

It was simply a statement of party fellowship. Regardless of whether or not he runs, “I will raise money nationally,” the mayor told Currie and Stellato, both here in support of Assemblyman Gary Schaer (D-36) at Schaer’s fundraiser.

“I’ll take him at his word,” Currie told PolitickerNJ.com.

When Jon Corzine was on the ballot against Christie, Passaic and Bergen Democrats lost freeholder seats. They don’t want that – and worse – to happen in the event a strong top of the ticket fixture opposes the Republican incumbent governor.

As the headliner at  Schaer’s fundraiser, Booker gave a heavy on the holidays speech, rife with Torah references and religious symbolism that drained the faces of political animals trying to understand even as they later said they were inspired.

“I know we’re here for a political occasion,” Booker said, “but, dear God, we have a spritual purpose.”

“This is not a local speech,” a Democrat said later, speaking on condition of anonymity. “He’s running for something, I just don’t know what.”

In fact, Booker hasn’t ruled out either governor (2013) or the apparently easier path of senator (2014).

Another person actually did get in the Democratic Primary today, the first elected official to do so – state Sen. Barbara Buono (D-18).

“She’s a really good person,” Booker said of Buono. “Should she and I run against each other, I think it would be a really good race in which we would be able to provide contrast. It would be a race about substantive solutions, not personalities. We’re not slash and burn politicians. We wouldn’t destroy each other on our way to being the last man standing to go up against Chris Christie.”

The mayor said a primary would be good for the party.

When party guests engulfed him, at least one woman leaned in very close, told him she respects whatever it is he decides to do, then pleaded with him to run for governor. 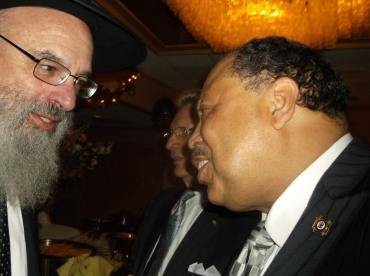